BRUNSWICK, GA – We’re underway. A jury some feel hopeful about and opening defense statements illustrating the humanity of the seven Kings Bay Plowshares activists completed the first day of the Plowshares trial.

At the end of the day reactions were mixed among supporters who traveled far to this southern Georgia resort town for the trial. Jury selection resulted in nine women, including three African-American women, and three men seated for the trial.

In his opening statement, Assistant US Attorney Karl Knoche summarized the expected testimony of five witnesses from the naval base who he said will describe how the KBP7 snuck onto the base and split into groups to hold banners, pour blood, hammer on a monument of the Trident missile, and other actions.

Defense attorney Bill Quigley led off the defense’s opening statements. “If I were you,” he told the jury, “I’d have three questions: One, who are these people? Two, what did they do? And three, why did they do it?”

He described how each of the seven defendants has devoted their lives to voluntary poverty, feeding and serving the poor, and working for peace. He described his client Elizabeth McAlister’s life as a nun, and how she later co-founded Jonah House with her husband Philip Berrigan. He told of her three children and six grandchildren, her protesting and being imprisoned for peace activism, and their supporting themselves by painting houses. “Liz has been working for peace for 60 years,” he said.

Quigley told the jurors the seven brought hammers to the action because they believe the prophesy of Isaiah, that peoples “shall beat their swords into plowshares, and their spears into pruning hooks: nation shall not lift up sword against nation, neither shall they learn war anymore.”

He told the jury that defendants Carmen Trotta and Patrick O’Neill wore GoPro cameras to document the action and acknowledge what they did.

The seven were motivated by the commandment “thou shalt not kill” as well as by their children and grandchildren. “They are full of faith, hope, and charity,” he said. 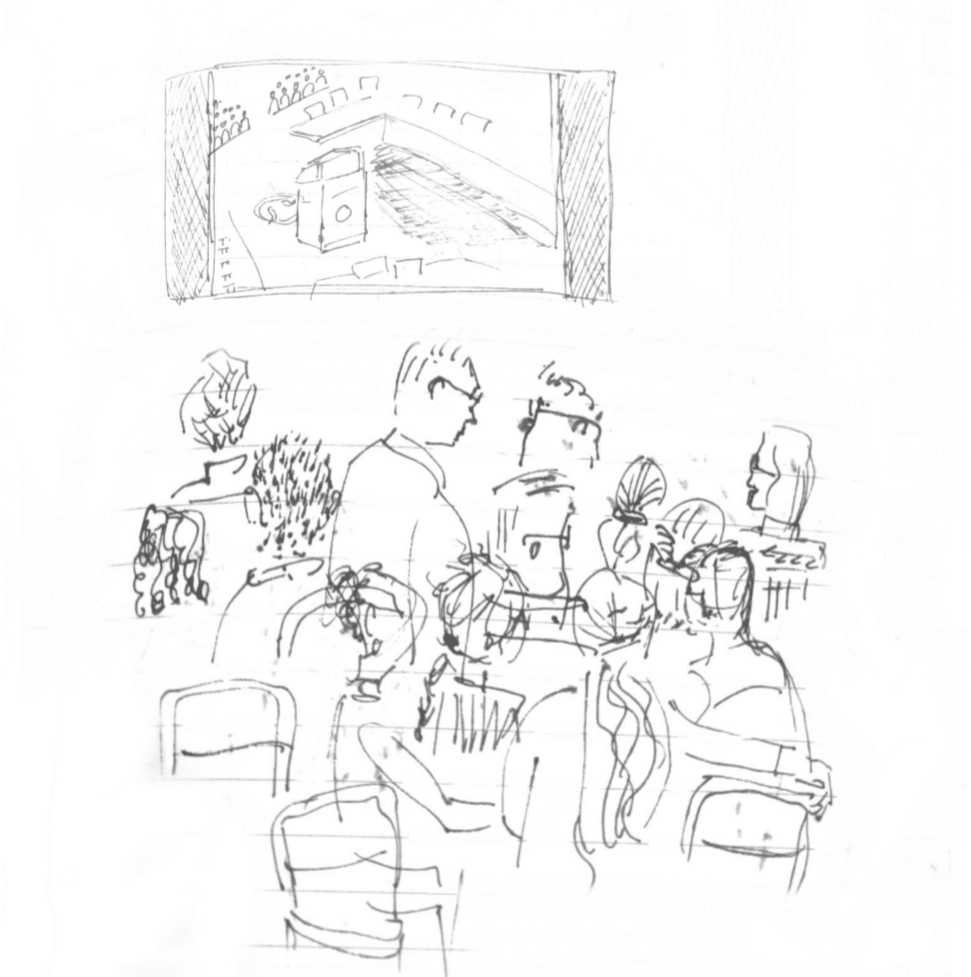 Illustration by Chrissy Nesbitt of supporters watching a closed-circuit television from a courtroom used for the overflow crowd of supporters during the first day of the trial of the Kings Bay Plowshares 7. Little else than pen and paper are allowed in the courthouse.

Clare Grady, representing herself, made her opening statement by describing her “big Irish family” full of joy. She described her decades of work feeding poor people and caring for the elderly.

“The most important virtue of being a jury of your peers is you are human,” she told the jury. “For me, it always includes common sense and conscience, and using my head with my heart. So, you are the ones asked to render a just verdict. One that is just for the defendants and for the community.”

Their actions were not criminal, she told the jurors. “Nuclear weapons are illegal and immoral.” The Trident system is the “most deadly weapons system on the planet,” she said.

Each Trident submarine at Kings Bay can carry 24 submarine-launched ballistic Trident D5 missiles. Each missile can carry up to eight 100 kiloton nuclear warheads, about 30 times the explosive force as the Hiroshima bomb.

Though the trial is a joint trial, each defendant will be judged separately. The five remaining defendants will make their opening statements after the prosecution’s case ends.

He told supporters outside the courthouse how he was pleased that three African-American women were placed on the jury, and nine women overall. “I think we have to be happy about that. I think we have a decent jury. They seemed really attentive during the openings. I think, certainly, Clare and Bill made the case, the whole case.”

After the jury was sent home for the night the judge admonished the defense, referring to the opinions she has issued restricting them any mention of international law, a necessity defense, or the Religious Freedom Restoration Act. “I am going to require that you follow my rulings or we are going to have to make alternative arrangements,” she said. “This is not a forum for converting people to a particular religion. I gave you a tremendous amount of leeway.”

Wood said she expects the trial to last four or five days.

Fr. Bob Cushing watched the proceedings over closed circuit television in another courtroom used for an overflow crowd when the jury pool was assembled.

“The Holy Spirit is in charge. That’s what we’re here to say.”

PLEASE DONATE
There are many, many expenses for this volunteer-run effort. Your generous support of the Kings Bay Plowshares 7 will help cover the ongoing costs surrounding this trial and social change effort. You can give at our GoFundMe site and checks can be sent to Plowshares, PO Box 3087, Washington, DC 20010. Further details check the website: kingsbayplowshares7.org.