Festival of Hope – Trial To Begin

Festival of Hope, Trial to Begin

The Kings Bay Plowshares 7’s long-awaited trial finally begins today at 9 am with jury selection, more than a year and a half after their symbolic disarmament action on the 50thanniversary of the assassination of the Rev. Dr. Martin Luther King, Jr. at the Kings Bay nuclear submarine base in St. Mary’s, Georgia.

Late Friday night, October 18, Judge Lisa Godbey Wood sent her final ruling on what testimony the defendants will be allowed to present at trial this coming Monday. This left the defendants only two days to finalize their defense.

The judge’s ruling was expected last Wednesday, October 16  after the last hearing. Expert witnesses, including Daniel Ellsberg and Prof. Frances Boyle, for the necessity defense, and Prof. Jeannine Hill-Fletcher and Bishop Kopacz for religious freedom, have been excluded. However, the deadly nature of nuclear weapons, the meaning of religious symbols and the defendants’ motivations will be allowed during opening and closing arguments, direct testimony by the defendants and cross examination. The difficulty of preparing for trial with no clarity until the last minute has added to pretrial tension.

Defendants have been threatened with a mistrial, contempt of court rulings, and severance from the unified trial if they disobey the guidelines.

“We have seen courts exclude information from jurors, the defendants have not been allowed to present their motivation for acting to uncover the nuclear threat in 100 Plowshares actions since 1980,” noted Laurie DeFlaun of Ithaca NY and wife of John Grady of the Plowshares Number Four who is Clare’s brother. 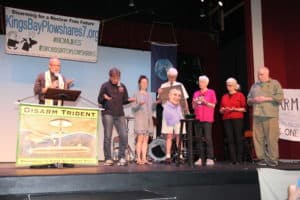 A Festival of Hope was held on Sunday afternoon in Brunswick at the historic Ritz Theater with 200 supporters in atttendance. Glenn Carroll of Nuclear Watch South and Robert Randall, a longtime local activist served as emcees. Brother Gilberto, a Japanese Buddhist monk opened with drumming and a peace chant. Hermina Glass-Hill, a local Afro-american historian and author and Karen Grainey, a coastal ecologist, spoke. The Geechee Gullah Ring Shouters from the barrier islands headlined the program. These descendants of slaves presented a programof dances and songs of their African heritage which they have been able to maintain. Musical performers included Joanne Steele, Steve Jacobs and Aviva and the Flying Penguins. Steven W

For two years the seven defendants studied the legendary whistleblower Daniel Ellsberg’s sobering book, The Doomsday Machine, Confessions of a Nuclear Planner in preparation for their action. He served on the National Security Council, giving him unique insider knowledge of US nuclear policy and the dozens of times nuclear weapons use was averted with only minutes to spare. Ellsberg, referring to the KBP7 defendants, said, “An action which would under other circumstances be illegal can be justified as legal by a reasonable belief that it is necessary to avert a much greater evil: in this case, omnicide, the killing of nearly every human on earth in a war in which the nuclear missiles aboard Trident submarines were launched.”

International law professor Frances Boyle wrote in his statement entitled “Criminality of Nuclear Deterrence,” “Today’s nuclear weapons establishments as well as the entire system of nuclear deterrence/terrorism currently practiced by all the nuclear-weapon states are criminal — not simply illegal, not simply immoral, but criminal under well-established principles of international law.

“All human beings possess the basic right under international law to engage in non-violent civil resistance activities for the purpose of preventing, impeding, or terminating the ongoing commission of these international crimes.”

Dr. Jeannine Hill-Fletcher, theology professor at Fordham University, testified during last Nov. 7’s pre-trial hearing on behalf of the defendants, supporting their deeply held religious beliefs based on Catholic Social Teachings. In reference to the prayerful sacramental pouring of blood outside the base administration building, Hill-Fletcher said, “You’re scandalized by the sprinkling of the blood. How come you’re not scandalized by the potential of these bombs to actually spill blood around the globe?”

Mary Rider, wife of defendant Patrick O’Neill and mother of eight, speaking to the US nuclear policy and echoing Greta Thunberg, says, “How dare we! How dare we threaten the destruction of the whole planet with Trident’s nuclear weapons  How dare we plan for the death of millions! How dare we put away and silence the Kings Bay Plowshares 7, good people of conscience, who are trying to prevent Trident nuclear weapons from annihilating the planet!”

In Washington, D.C., on Oct. 17, supporters delivered thousands of signatures on a global petition to Attorney General Barr calling for the dismissal of the charges, which could lead to more than 20 years in prison. International figures and Nobel peace laureates, including Archbishop Desmond Tutu, Mairead McGuire, International Campaign for the Abolition of Nuclear Weapons representatives Beatrice Fihn and Dr. Ira Helfand, actor Martin Sheen, Angela Davis, Oscar Lopez Rivera, Fr. Jim Martin, and over 100 distinguished signers have signed to support the seven.

The community of resisters to nuclear weapons is converging on southeast Georgia to honor the inspiration of the bold “sacramental and prophetic denuclearization” which the judge acknowledged at the hearing in August on the Religious Freedom Restoration Act.