Fr. Steve Kelly of the KBP7 was released from federal custody with time served on April 13 after a probation violation hearing in Tacoma, WA. He admitted to the offenses of failing to report for supervised probation for a September, 2017 trespass and for getting arrested at another military facility. He had served the additional six months (mostly while in transit from Georgia) for this conviction so had served the maximum. He was ordered to report within 72 hours of release for supervised probation for the Kings Bay conviction which he refused to do for conscientious reasons so a warrant for his arrest has been issued.

We don't have any address for him now.

Other addresses are below.

Inmates may only receive letters, blue or black ink on pure white paper. These are photocopied and given to inmate. Use your full name in return address and prisoner's full name and number. Some letters with return address stickers are being returned so we recommend writing it out. But the authorities seem to be somewhat arbitrary.  Also put your return address on letter itself as the envelopes may not given to the prisoners.

We think our friends can receive new paperback books from a publisher only. They also may receive newspaper and magazine subscriptions, again only from the publisher. These should include the prisoner’s name and number and mailed to the addresses above. We suggest you wait until we have more definite information and check with the support team before ordering things. There are limits as to how many books they may have at any one time.

Greetings in the peace that the world cannot give...

Please pardon my spottiness in terms of keeping in touch with all of you since getting out of jail in early September. It has never been my custom to allow the federal government to indulge the fantasy that supervising me is a legitimate use of their time or resources, and to be honest, it’s been a bit difficult to find my footing out here in minimum security for the past three months. In our case, magistrate judges Baker and Cheesbro have clearly seen fit to use bail, house arrest, curfews, and ankle monitors as preemptive punishment for the accused. (This was made amply plain when in that same court, four persons arrested in October for allegedly stealing explosives and ammunition from Kings Bay Naval Base were released without restrictions, on a promise to return for court appearances!) Nevertheless, I cheerfully opted to accept these bail conditions on an emergency basis, when it became clear that the Glynn County Jail was not terribly interested in allowing me access to adequate medical care after a diagnosis of skin cancer. As things turned out, this proved to be a good decision, because, after two successful surgeries back home in New Haven, I've been given a clean bill of health with no further follow-up care required.

So it's time to go back. It's obvious that this governmentally-imposed obedience training program amounts to nothing but another form of imprisonment, one for which the accused do not receive any credit toward an actual post-conviction sentence. This has become a scandalously common abuse of the Bail Reform Act in courtrooms all across the country. Personally, the daily practice of voluntarily cooperating in my own captivity has also imposed a strange sort of existence, one in which I find it difficult to fully engage in life and relationships in the ways I'm accustomed to doing so. It's an unhealthy dynamic that has only become worse since the reason for my decision to take bail no longer exists, and the court’s lack of integrity imposes the responsibility on me to make that dynamic change.

From the beginning, my participation in the Kings Bay Plowshares action was, first of all, an act of contrition for complicity in the sins of nuclearism and empire, and I've regarded any incarceration as penance for those sins. But the jail has also been for me a place of ministry, personal faith-development, and formation of conscience. It provides the incredible daily privilege of walking with Jesus in the person of the prisoner, and of seeing the world the way He did: from the perspective of the bottom. It's a lot like being in an unusually noisy monastery where all the monks have tattoos and share a fondness for the F-word! Of course, Christmas can be a very lonely and desolate time for people in jail, especially those who don't enjoy the constant support of family and friends on the outside as I do, so returning there before the holidays seems like a useful and appropriate sacrifice to make. With this in mind, there are no misgivings or mixed feelings about going back to Glynn County Detention Center, but rather a sense of rejoicing that, as Dan Berrigan liked to say, one has the freedom to go to jail.

A week ago, judge Cheesbro accepted a motion to return the bail money that was posted on my behalf and put me back in the jail on December 11th. This Tuesday, Luz and I will show up at the Glynn County Detention Center and part ways again, for another undetermined length of time. We will do this mindfully, reaching hands of solidarity toward our extended global family members who are now at this country's border facing atrocities and uncertainties far beyond whatever hardships we might be obliged to bear. Anyone who wishes to join us, before my self-surrender, in a group hug and a prayer for refugees, would be most welcome to meet us there in the GCDC parking lot (100 Sulphur Springs Road, Brunswick, GA 31520) at 11:30am. After that, I'll look forward to your postcards, and delight in all news of your ongoing efforts to bring about the nonviolent collapse of the U.S. empire, in defense of all creation... Love and Prayers,

Most of you will be surprised to hear that I got bailed out of the Glynn County Detention Center on Tuesday afternoon. A week and a half ago I was informed by a local doctor that a cyst-like growth on my left nostril, which has increased in size since I’ve been incarcerated, is In fact cancerous and needs to be promptly removed. Fortunately the prognosis is good; the surgery is non-invasive and virtually always totally successful, with no subsequent therapies expected to be necessary. Actually, my family and I gave serious consideration to my remaining in jail and having the operation done at a Brunswick hospital. However, the gratuitous obstacles that this jail imposes on inmates in need of health care-such as denying me the right to even read the medical reports on my diagnosis, and refusing my request to meet with jail medical staff to discuss my aftercare needs- ultimately led us to regard that option as too risky and emotionally burdensome.

Luz drove down from Connecticut to pick me up, a happy reunion indeed! We will need a few days back home to reunite as a family, discuss terms with the local probation office there, and make the necessary arrangements at Yale New Haven Hospital. When all that is in place, it should become clearer how best to make use of the time that still remains before the trial. In the meantime, be assured that our commitment to the entire Kings Bay Plowshares community and our vision of a disarmed world is as strong as ever. I’m inexpressibly grateful for your constant support which has nurtured my spirit and gladdened my soul during these blessed five months, and to everyone who donated to the bail fund to make my release possible.

Another jail reflection, completed the day before I found out about all of this, will soon be posted from the road as we make our way home. I look forward to being back in touch in the coming days.

Clare was released from Glynn County jail in Brunswick, Georgia. She had been in jail in South Georgia since April 5, 2018 when she and six others entered Kings Bay Submarine Base to symbolically transform swords into plowshares and call for the abolition of nuclear weapons. She will return home to Ithaca New York and will be confined to her home. Clare will be required to wear an electronic ankle monitor. She was fortunate to have friends and supporters able to pay the $5000 bond with $50,000 surety in order to obtain her release. She chose to obtain release at this time because she is innocent and knows that preparing for trial out of jail will be more effective. She will spend her time in Ithaca assiduously preparing to mount a vigorous defense of her and her co-defendants’ innocence. Both international law and domestic law clearly outline the necessity of citizen acting to prevent greater crimes by their government. Nuclear weapons are illegal and immoral and thus citizens have clear right and obligation to act to prevent their use and production.

So, to the delight of many, Martha, Patrick, and Carmen of the Kings Bay Plowshares, were able to be bailed out of jail this morning!!! The three will have to wear ankle bracelets and be confined to their homes. They intend to work from their homes on organizing, giving interviews and preparing for trial. Meanwhile, Clare, Liz, and Mark have decided not to bail out, but will wait to see if the bail will be reduced. They will continue the jail witness and write, and prepare for trial. Steve Kelly, was not given the option of bail because he has a pending case in Washington State for a protest at the Trident sub base there. 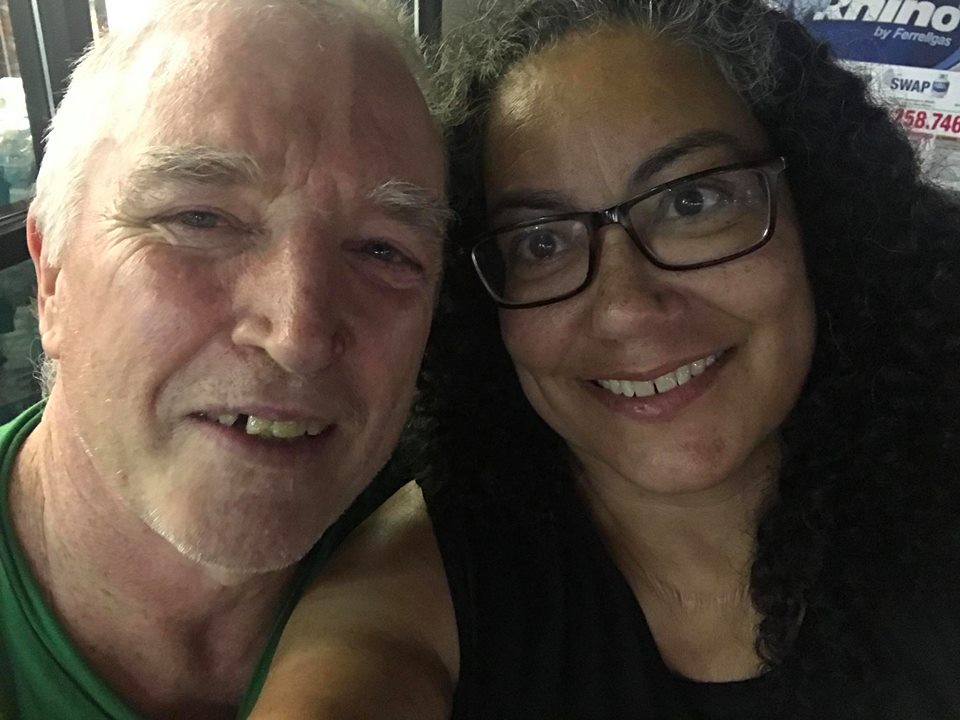 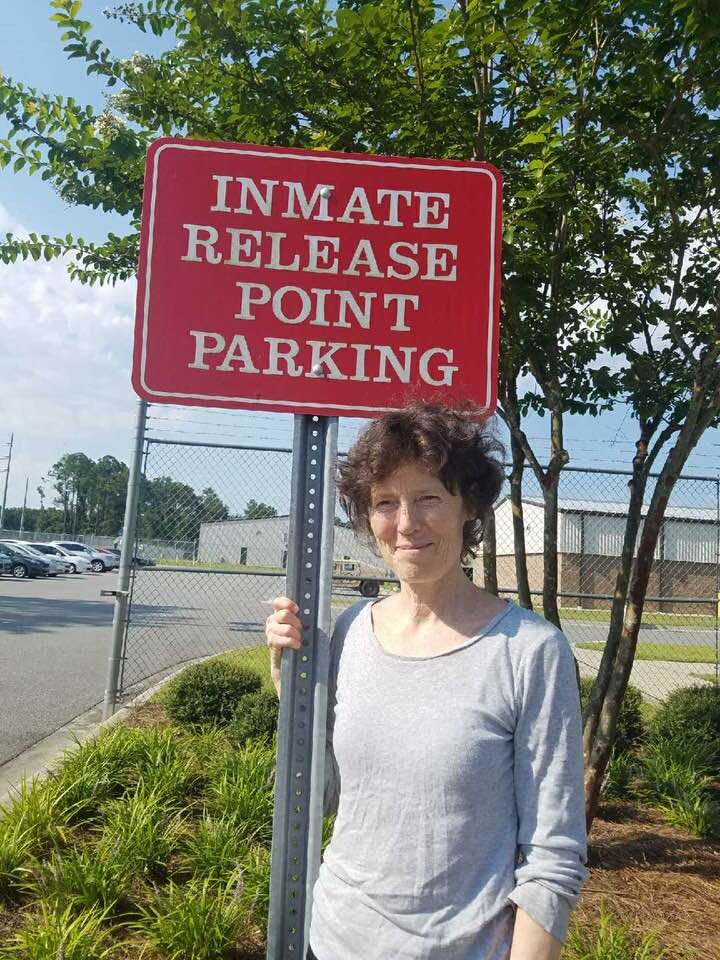 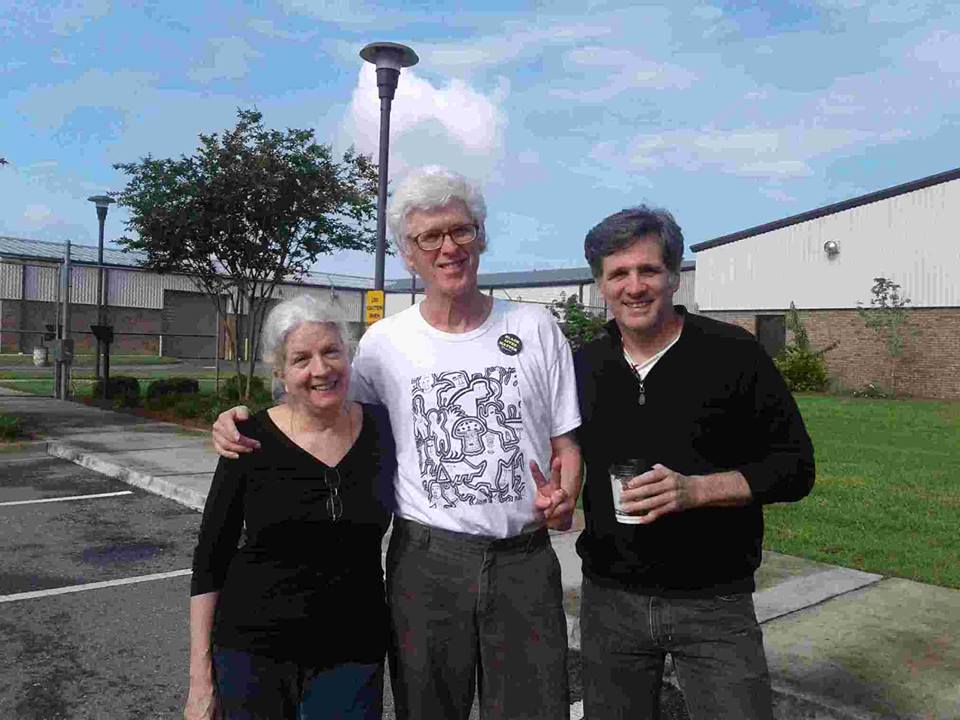 Martha, Patrick and Carmen as they were released from the Glynn County Detention Center, 5/24/2018 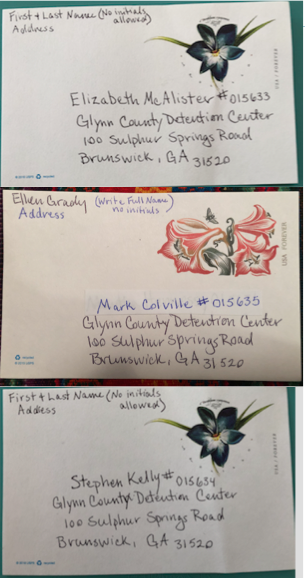 Example postcards – please read instructions for sending mail to make sure it is not rejected.