Get Involved in Nuclear Weapons Abolition

Suggestions on how to get involved

Join us in Court in GA

The defendants are asking supporters not to travel to Brunswick, GA to support the witness in court during sentencing of the Kings Bay Plowshares 7 because of the dangers of the pandemic. We expect there to be an audio link to listen to the court proceedings. Check current posts for more information.

Checks can be made out to:

Divestment is one mighty tool to help end the nuclear weapon industry.   “Follow the money.”

You are in control of your money.

No matter how modest your savings are, your individual divestment can contribute to the goals of the Kings Bay Plowshares 7 and of the millions throughout the world dedicated to nuclear weapons abolition to preserve and sustain life and planet.

By speaking with your bank, credit union, your retirement or other funds manager, or your financial advisor about your concerns and commitment to learning how your money is used, this can be the feedback that is key to these institutions becoming more aware of their actions, and thinking about creating new policies.

Especially if they may lose a loyal customer and your money with this growing movement.

The ways to divest:

* Your Bank, your Credit Union.

* Investments - any stocks, funds, other financial instruments you may have  (retirement or otherwise).

* Your organizations or university.

* Your town, city and state, nation.

They are great.  But many members assume their money is not invested in armaments.  You must check carefully for, similar to banks, even credit unions invest a portion of their holdings. You have more influence in CUs.  Sit with your Credit Union rep and ask the question first.   Then let them know of your colleagues the KBP7, and the TPNW and why it’s important for you to not have any of your assets going to any of the hundreds of companies involved in armaments, esp. nuclear weapons.    Ask them to include this in their advertising, or to make a public statement to such effect if they are clean.

Maybe you can help change this fact: Currently there is only one Bank in the United States that has Policies that prohibit investing in or transacting with any company that deals with nuclear weapons or any armaments.

Amalgamated Bank of New York - America’s Socially Responsible bank with corporate headquarters in New York (not to be confused with a bank of same name in Chicago). We hope other banks will adopt these policies and do not want to endorse any in particular.

Amalgamated also has no minimum balance, and Free ATM service throughout the U.S.

All banks loan and invest and think primarily of profit.   By speaking with your bank about your dedication and personal sense of responsibility for these weapons, why you will switch, you may inspire them with Amalgamated’s example.  State that they can be profitable while avoiding weapons and tell them of your colleagues in prison.

If you have a long close relationship with your bank’s personnel, and it’s location is convenient or you have to deal with cash or personal checks you may choose to stay.  But have the conversation with them, See what they say. If there isn’t a positive response, “move your money”.     You can open an Amalgamated Bank account from afar, and transfer whatever amount you wish, keeping the minimum your current bank requires without fee.  Move all your automatic payments and deposits without charge.

You will feel so much better that most your money isn’t being leveraged in banks lending toward the things you don’t believe in (nuclear weapons, all armaments, but also not big pharma, big oil, tobacco, for-profit prisons, surveillance, etc.) and knowing your money is used toward industries that are pro worker, for climate sustainability and human rights.

If you have them, make an appointment and have a serious talk with all who manage your money.  Find out exactly which companies are in your “Mutual Funds”. Move them today.   The advice to have a “diverse portfolio” no longer requires having the armament companies. Sustainable companies are increasingly profitable.   Get your money out of everything that you don’t believe in, now. It can take you less than an hour. Check out one useful tool Code Pink and others use for this discernment:

You have a voice in your retirement accounts.   Stand up and be counted, let them know that it is now clear they can meet their “fiduciary responsibilities” today by moving to more sustainable funds and enterprises.  These accounts may not switch overnight, but by adding your vote and your voice, they will in time.

It’s controversial, but if you are a determined and vocal advocate and wish to keep a certain stock so you can gather inside information, consistently write, vote, be diligent about traveling to and participating in meetings - that is an option for some to do.

We would not have nuclear weapons without Harvard, Columbia, Stanford and many others. Hundreds of our most prestigious institutions of learning are directly connected to our defense industry and especially that of nuclear weapons.   Most likely yours.  Find out what is being funded by whom, for what.

As alumni you can have direct impact by writing and calling, and not donating, until they pull out of enabling this horror.   Influence as many people as you can to not only pressure for a direct divestment campaign, but to support instead dedicating all our intelligence and brain power to be focused on what can save this planet for our grandchildren.   Students have power when you gather.  It only takes one to start.

In 1963 President Kennedy passed the Test Ban Treaty.   He meant it to be the first step toward total nuclear disarmament.  NYC and many other localities immediately passed resolutions in support.

The NPT Nuclear Non-Proliferation Treaty presented by President Lyndon B. Johnson at the UN in 1968 was an attempt to get back on track, but its Article Six has been ignored. This is the clause that called for swift good faith moves toward disarmament.

In the 1970’s and 80’s many hundreds of towns, city’s and states passed Resolutions and Proclamations to rid the world of nuclear weapons and advocate for the two major nuclear weapons states to gather together and end the arms race.

We were joined by the same great citizen efforts throughout Europe and brave citizens of the Soviet Union, and many other states around the world.

In 1986 we got within an inch of this goal with M. Gorbachev, who cited these citizen efforts as an inspiration, but the industry desperately mobilized all its weight to oppose the worlds citizens will.

In 1991 when the Soviet Union dissolved and we no longer had the 46 year long faulty justification for why we needed these weapons, we had the perfect opportunity to disarm these horrors.    But despite the overwhelming citizen calls for disarmament, the Bush/Cheney administration found the way to keep the industry thriving…. “Global Strike.”

With 155 nations working hard for several years on the awakening the world to the immeasurable harm and humanitarian consequences of the use of nuclear weapons, it led to a Conference on the Prohibition of Nuclear Weapons at the UN.   122 countries ironed out and adopted the Treaty in July 2017.   It is on its way to becoming international law. However, all the nuclear nations have opposed this treaty.  We each can continue to remind our Representatives this is where we must move to.   We can also continue to network with all those around the world to do so for their nations.

Use the Cost of War trade-off meter from the National Priorities Project which shows how your tax dollars are being wasted on weapons instead of providing essential services in your community. Bring this to the municipal council’s attention. Organize community members to speak at council sessions explaining the harmful impact of wasting revenue on war. Bring Vets! Bring teachers! Bring hospital workers! Bring transportation dept reps! Bring seniors! Bring housing advocates and unemployed people! Bring parents! Bring students!  Let them testify for 3 mins about what resources they need. It’s a slam dunk. For acting on a state level, team up with other localities to go to your state comptroller to divest from nuclear weapons. 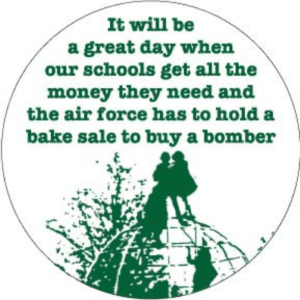 A recent example of what can be done is the NYC Resolution to divest pensions from nuclear weapons and to support the TPNW. Here are both 60 oral testimonies and some 70 written testimonies presented at the Public Hearing to the New York City Council @ City Hall on the 28th of January, 2020.

Fortunately there are now great resources to help us here.

Chock full of data on companies and a blue print of how to move the money from nuclear weapons toward those industries which sustain life and planet:

Watch the April 20th Webinar on the report, with U.S. Rep. Jim McGovern:

Identifies many companies to steer away from.  They have tools and language and resource links that can help greatly.

Identifies many of the industries, financial institutions and funds and is extremely useful in identifying where and whom.  Also links to tremendous resources.

Don't Bank on the Bomb : A city guide to divestment.

Since 1971 each year WRL provides an annual Military Spending Pie Chart, based on the reliable sources available.  The actual totals are higher, for it does not include the spending we don’t know about. For FY 2021 at least 47% of the discretionary federal budget (not including trust funds such as Social Security) goes to present and past military activities.

Stockholm International Peace Research Institute.    When doing personal research for divestment many prefer using the SIPRI top 100 list of weapons companies.    Many campaigns only focus on the top 25 corporations.

Even though there are thousands of companies involved with nuclear weapons spread throughout the US (and for other nuclear states numerous corporate structures throughout the world) the top 100 is a decent screening tool to begin. As with others their data base is only obtained from open sources, which means many hidden funds are not included.

Our vital treaty, very clear and easy to read.   Only several pages long, in which it clearly states it is against international law to support the development or possession of nuclear weapons in any way.  Article One of the TPNW clearly prohibits assisting, encouraging or inducing “in any way, by anyone” engaged in any activity concerning making or keeping nuclear weapons, and/or receiving such assistance.

Read for yourself. The official UN page:

The leading supportive organization for the TPNW and all its goals:

The International Campaign to Abolish Nuclear Weapons winner of the 2017 Nobel Peace Prize for its support from around the world for the TPNW,. There is a huge volume of resources and links for most information you’ll need for data and campaigns.

Another source of excellent anti-nuclear work, and anti-war work in general.  Many useful and informative links.   They also have had success with a divestment campaign in Charlottsville, VA.

The Nuclear Resister networks the anti-nuclear and war resistance movements while acting as a clearinghouse for information about contemporary nonviolent resistance to war and the nuclear threat.   They emphasize supporting the women and men jailed for these actions.   They have a blog and for decades a quarterly newspaper.

The pandemic makes the call of the KBP7 acutely clear today….   as we try to track where trillions for armaments stay on track, and others struggle for healthcare, housing, jobs, and food.     The time for Divestment is now.

Learn more about the environmental and social justice impact of nuclearism at:

https://vimeo.com/125974037  Check out “Radiation Monitoring Project” from Sloths Against Nuclear State on Vimeo.