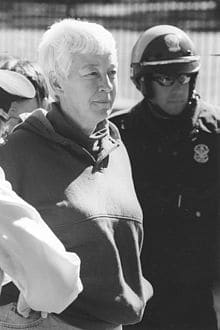 I was born a twin, the 6th of 7 children to parents both of whom were “refugees” from the North of  Ireland in the early 1920s. Being Catholic then and there meant being unwelcome, if not complete outcast. My father set up a contracting business in New Jersey and directed it for the rest of his life.  Catholic and Republican, it was a shock to them that I became an ardent opponent to the war in Vietnam even as my twin’s husband fought there. There were many family disagreements but we were blessed at being able to continue to laugh. love, visit and to talk with one another throughout. It taught me much about fidelity.

I entered religious life from college and, upon profession, was assigned to teach History of Art at Marymount College – an all women’s college in Tarrytown NY. The war in Vietnam was heating up; my students had brothers, boy friends facing induction and potential if not probable injury and/or death. How to mentor? How to grieve? How to walk with them? The answer was in the streets opposing the war; the answer grew to participating  in acts of civil resistance to it.

Communities of resistance formed and I became part of them. The people in them touched my heart and helped to form my conscience.  This was the context in which I met Philip Berrigan, a Josephite priest. He was instrumental in helping to move many people from meetings and marches into direct action and resistance.  He was the first Catholic priest in the country to engage in civil resistance and to suffer prison in consequence. He then worked tirelessly to encourage acts of resistance; there were
no less than 300 actions against draft boards  across the country which finally forced the military to move to a volunteer army, navy, etc. I participated in the draft board action in Delaware in which all the boards in that state were compromised in the one evening.

Phil and I both left our religious communities in 1973, married one another and began  our life in community with a circle of people with whom we had worked over the years. We called our community “Jonah House” and it continues to struggle to live and act responsibly in a war torn world. It was there that our 3 children were born and raised.  It was from there that we organized regular resistance to war and weapons at the White House, the Pentagon, and Johns Hopkins Applied Physics Research Lab – among other sites.

Sometime in 1973 we read of the change of US nuclear policy under James Schlesinger- then secretary of war- from MAD (Mutually Assured Destruction) to FTO (Flexible and Strategic Targeting Options). We set ourselves to research it and learned that it made nuclear war more probable and imminent. We agreed to remain with resistance to Vietnam until it ended but to learn as much as we could about the implications of the new policy and how we might address it. Two years later our military was ingloriously routed from Vietnam and we began to address the horror  of nuclear  war!

A whole series of “plowshares” actions happened all across this country. In each, people went through a process of formation in order to feel right and ready to address an aspect of the nuclear triad. They occurred not just in the U.S. but in England, Scotland, Germany, the Netherlands, Australia and New Zealand.

I participated in the Plowshares action at Griffiss AFB in Rome N.Y. on Thanksgiving Day 1983 and was sentenced to 3 years in Federal prison.

Throughout the time I supported many going through such actions s well as continuing to resist locally in Baltimore and D.C.I come to a King’s Bay on MLKing’s Day to raise the cry against these weapons of mass destruction which have already done incalculable harm to the lives of many both here and abroad.   The devastation of which they are capable is almost beyond imagining. We must pull it back; we must turn it around; we must stop it – for God’s sake, for the sake of the children, for the sake of life on earth.