To mark the fourth anniversary of their action the KBP7 and supporters are planning a Walk for Peace and Nuclear Abolition beginning at Riverside Church in NYC and ending at the Isaiah Wall at the United Nations. It will begin at 11AM on Monday, April 4.

On this, the 54th anniversary of Rev. Dr. Martin Luther King Jr.’s assassination, please join the Kings Bay Plowshares in commemorating the life and witness one of our nation’s greatest apostles of peace and nonviolence. We will begin at Riverside Church- the site where Dr. King first named and connected the “triplets of evil” in the United States (war, racism, and unbridled materialism) in his controversial Beyond Vietnam speech. The walk will then process to the Isaiah Wall at the United Nations, where we will cry out for the total abolition of nuclear weapons.

On April 4th, 2018, the Kings Bay Plowshares Seven trespassed onto a U.S. Naval base in Southern Georgia, bearing a message from the great Dr. King: “The ultimate logic of racism is genocide.” There they performed a symbolic act of nuclear disarmament at the home port of the most deadly, omnicidal weapons of mass destruction ever created in human history, the Trident Submarine. Four years later, all have served lengthy prison terms, while the exact kind of geopolitical scenario threatening nuclear annihilation which the Seven were trying to warn the world about is now becoming a reality with the war in Ukraine.

There is no longer any time to be silent.

Please join us if you can! We encourage you to bring a sandwich and a water bottle. 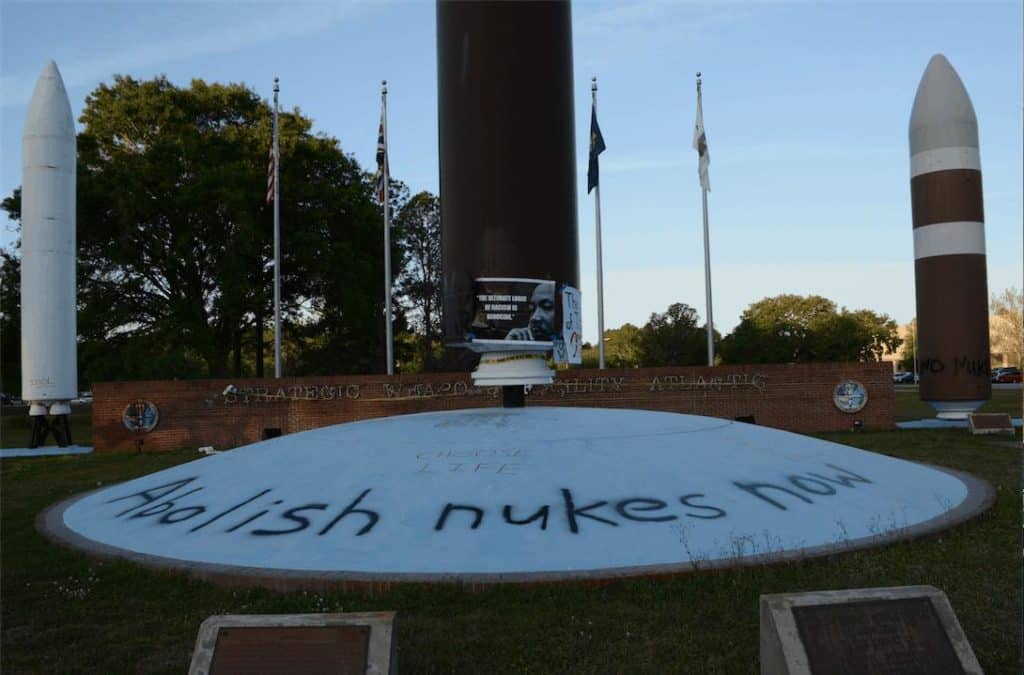 First, the Kings Bay Plowshares would like to express our deep gratitude for the wonderful prayers and support we have received these last four years from all of you and our legal team. We are especially grateful for the Brunswick, GA community of friends that made our time in their city a love-filled experience.

All 7 defendants completed their prison sentences last year, and six remain on 3 years probation. Elizabeth McAlister was released from probation for health reasons, and she has also moved into assisted living as her memory and overall health has declined. It is suggested that you write to Liz to keep in touch and wish her well: Elizabeth McAlister c/o Kate Berrigan at 110 Hempstead Street, New London, CT 06320.

Appeals
The biggest legal news is that the Kings Bay Plowshares have filed an appeal with the U.S. Supreme Court asking the nation’s highest court to dismiss charges in our case because both the U.S. District trial court and the 11th Circuit Court of Appeals, in its denial of our initial appeal, failed to properly consider the elements of the Religious Freedom Restoration Act as they applied to the specifics of our case.

Under RFRA, each of us had to meet specific criteria to be eligible to use RFRA as a legal defense.

1. We had to have “religious beliefs”
2. … that were “sincerely held.”
3. We had to prove that the government “burdened our practice” of said beliefs by its sanctions against us.
4. Finding the above to be true, which the District Court affirmed, the government was required to “use the least restrictive means” to sanction us.

In its response to our RFRA brief, the court found that we 7 “engaged in symbolic, prophetic, sacramental de-nuclearization” by our actions at Naval Station Kings Bay. Our substantive argument to SCOTUS is that the government failed to even consider the “least restrictive means” when it turned the seven of us over to the police and subsequently handed down three felony charges and one misdemeanor without considering other options.

Attorneys Joe Cosgrove (our attorney of record for SCOTUS) and Vern Walker (our RFRA expert advisor) have ushered us through this next step.

We are pursuing the SCOTUS option for two major reasons:
A. to hold the court accountable for failing to follow its own legal criteria regarding our right to use RFRA; and
B. to have our charges dismissed, which would result in our probation being dismissed and we’d get back the $33,000-plus that was “stolen by the government” for restitution.

Update on Restitution
Before we were all sentenced to prison, Carmen’s father, Frank Trotta, died. Carmen received an inheritance from his father’s estate. The government found out about Carmen’s inheritance and garnished a portion of the inheritance to pay off our collective restitution in full.

In addition to the SCOTUS appeal, Mark’s appellate lawyer has also filed an appeal in the 11th Circuit asking that the restitution be dismissed under RFRA. That case is slated for oral argument in Atlanta on May 19. Several of the defendants plan to attend the oral argument. It should also be available for the public to listen in to the arguments as was done with the earlier appeal. Details should be available closer to the date.

There is another 11th circuit appeal, filed by Patrick’s appellate lawyer, that is also addressing RFRA arguments. (You might also be interested in Patrick’s response in NCR to his being thrown out of the Knight’s of Columbus for his plowshares conviction: https://www.ncronline.org/news/opinion/i-took-part-anti-nuclear-protest-then-i-was-suspended-knights-columbus )

In another legal matter, Mark’s probation was initially violated by a Hartford, CT federal District Court Judge because Mark refused to submit to drug testing, refused to hand over personal financial information to his probation officer and refused to pay restitution. After the restitution question became moot because the money was stolen from Carmen, the judge agreed that Mark no longer needed to disclose his financial status, and he allowed Mark to skip drug testing because drugs were not part of his “crime.”

Following his release from federal detention last April after almost three years in various jails coast-to-coast, Steve Kelly was “required” to report to his Georgia probation officer within 72 hours of his release. Steve, who always refuses to comply with conditions of probation as a matter of principle, never reported. District Court trial Judge Lisa Godbey Wood issued a warrant for Steve’s arrest and he remains “at large.”

While on probation, we are all required to report to our probation officer when ordered to do so, to get permission to travel outside of the federal district in which we live, to submit to random drug testing (except Mark) and to pay restitution (now moot).

There will also be a webinar at 7:15pm ET on April 4 by a coalition of organizations under the title of Breaking the Silence to read Dr. King’s speech and have presenters discuss its relevance for peace and justice work today. Details can be found at: https://kingandbreakingsilence.org/