Martha Hennessy was released yesterday, May 26, from Danbury prison after 5 1/2 months confinement to a halfway house in Manchester, New Hampshire which is about a two hour drive from her home in Vermont. Her husband, Stephen Melanson, picked her up and drove her to the halfway house. She expects to have to spend a week or two at the halfway house before being allowed to return home to finish the last few months of her 10 month sentence. She had applied for early release through the CARES Act which allows release for the qualified elderly to reduce the risk of catching COVID. She is looking forward to return to her home and family and her gardening soon. Martha gave a short video statement on getting out and it will be posted on the website shortly. 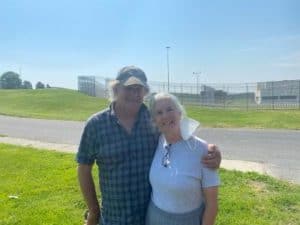 Carmen Trotta was furloughed today from Otisville prison after being denied release 10 days ago at the last minute because his proposed residence at St. Joseph Catholic Worker house where he has lived and worked for more than 30 years was considered too risky for the virus. He was subsequently approved to live in a friend’s apartment near the Catholic Worker. Three friends picked him up at the prison at 9 am and drove him to a halfway house in the Bronx where he was processed for 4 hours and informed of all the rules and restrictions. An ankle monitor was attached and then the friends drove him to the apartment in the East Village where he will be under home confinement. He had not applied for early release. He is supposed to remain in the apartment unless he gets permission to go out for shopping, medical visits or church. 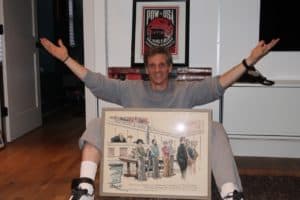 Mark Colville is scheduled to report to the Metropolitan Detention Center in Brooklyn, NY on June 8 to finish his 21 month sentence. He has already served 15 months in the county jails in Georgia before the trial in October 2019. He may also be eligible for an earlier release but does not intend to apply for any special consideration.