After three years and eight days imprisoned in various county jails and federal facilities since the Kings Bay Plowshares action, Fr. Steve Kelly walked out of the federal courthouse in Tacoma, WA today. He appeared before Magistrate Judge David Christel and admitted to the probation violations and was given time served and set free having served the maximum six months in addition to his plowshares sentence. Steve exited the courthouse in his prison khakis to be greeted by 40 supporters who had been vigiling outside. He knelt on the sidewalk and received a blessing. Now Steve is required to report to the probation department in Georgia within three days to begin three years of supervised release as part of the KBP sentence. He has announced that he does not intend to comply with that and is expecting a visit from the U. S. marshals. 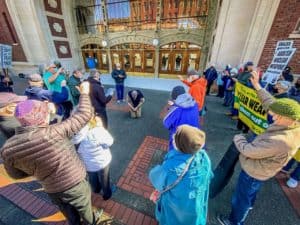 Details of the court hearing follow as published by the Nuclear Resister:

Today, April 13, in a brief, COVID-hybrid hearing in federal court in Tacoma, Washington, Fr. Steve Kelly, S.J. was sentenced to time served for violating conditions of his supervised release for a 2017 trespass conviction at the Kitsap-Bangor Trident nuclear submarine base. As of today, he had served the maximum six-month prison sentence for the original charge, and he was unconditionally released from custody.

Fr. Kelly appeared in person with his attorney Blake Kremer in the courtroom of federal Magistrate Judge David Christel, with the U.S. attorney and probation officer joining via video link. Supporters were able to listen in by phone using a number provided by the court for the public.

By the time of Fr. Kelly’s arrest in April, 2018 at the Navy’s other Trident base at Kings Bay, Georgia (the Kings Bay Plowshares action), a bench warrant had already been issued for his arrest for violating the terms of his supervised release by not reporting to the federal probation office in Washington state. Entry onto another military installation and the ensuing federal charges were additional violations addressed at today’s hearing.

The Jesuit priest remained in jail in Georgia from the time of his arrest through trial in October, 2019 and his sentencing in October, 2020. He received 33 months in prison plus restitution and three years of supervised release. With credit for time served, he’d essentially completed the custodial sentence but remained in federal custody pending today’s hearing. U.S. marshals took him from Georgia in mid-December to bring him to Washington state, a journey that took over 3-1/2 months with stays at three more private prisons and jails along the way in Florida, Oklahoma and Nevada.

Addressing the court before being sentenced, Fr. Kelly recounted the circumstances of his arrest and trial in 2017. He and six others had simply crossed the line during a peaceful protest at the Kitsap Bangor base. At their bench trial before Magistrate Judge Christel that September, they stipulated to all the facts, spoke their conscience, and were found guilty of trespass.

“We were sentenced to community service, fines and a year of supervised release,” Fr. Kelly continued.

“And I told you at the time in open court, hoping that you would understand, that as a matter of conscience I could not participate in any of those. And you listened, and then you asked me, you put it back to me, you said ‘What alternative is there?’

“I think you did not mean it rhetorically, it was really, just, what more could you do? So I’m only saying this to remind [you]… as the seven of us were processed for that, you said ‘Are you going to participate in this, Fr. Kelly?’ and I said, ‘Please, please, I cannot do supervised release. I’m asking you to translate it into a period of incarceration.’

“There was no further comment after that… I’m not trying to get out from underneath the consequences … but at least it wasn’t some kind of a trust that I was breaking. My conscience is clear.

“And of course what happened in Georgia… was a continuation of my acting in conscience. I think that it’s probably best said that while there are nuclear weapons out there, my conscience will probably be very consistent about this. I hope that helps. Thank you.”

Christel responded that he recalled the case and the conversation they’d had in the courtroom about his sentence, and why he had decided to impose probation at the time.

He told Fr. Kelly, “I thought throughout that matter that you and the other defendants were very principled, and very direct and honest. I always respected that and I still do.”

With that, Christel revoked Kelly’s probation, sentenced him to time served, and ordered his release with no supervision to follow in this case. Fr. Kelly was, however, reminded that the supervision imposed by the southern district of Georgia is still in effect, and that court has required him to report to the Georgia probation office within 72 hours of his release from prison.

Fr. Kelly addressed the supporters, “I’m out here in minimum security with everyone trying to get used to what it’s like. When I entered, we didn’t have the virus to contend with. Hopefully, I can learn. Right now I don’t have a warrant for my arrest but we’ll see what happens in the next three days. Then people will have to advise me and stay away from me so they won’t be held as accomplices.

So, we’re going to have to address the nukes, so there will be no more Hiroshimas or Nagasaki’s, right?

And as I was saying before, I want to recognize Ramsey Clark’s presence here. He was here at this very spot many times. Thank you.”