Clare Grady started her prison sentence on Wednesday, February 10. She is one of the Kings Bay Plowshares 7 who entered the Trident nuclear submarine base in Georgia almost three years ago on April 4, 2018, to nonviolently and symbolically disarm omnicidal nuclear weapons. Her daughters, Leah and Rosie, and husband, Paul, drove Clare 11 hours from Ithaca, NY to West Virginia where they met at the prison gate with Clare’s sister, Teresa, dear friend Chrissy Nesbitt, and Chrissy’s husband David. She’ll be in COVID quarantine for the next 2 to 3 weeks so we most likely won’t hear from her during this period of isolation. She can receive letters, though, and her address is below. 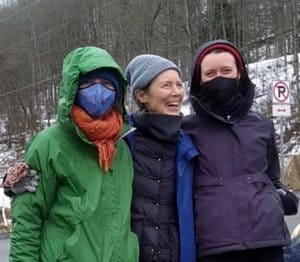 Clare with daughters, Leah and Rosie, outside the prison.

Here is a short video which is a blessing and a tune for Clare as she begins her prison sentence from Emma O’Grady (a cousin from Galway, Ireland), Oona Grady (a niece from Saratoga Springs) and James Gascoyne. Thank you to them! We know that Clare would want us to widen this circle of thoughts and prayer to include all prisoners.
https://drive.google.com/file/d/1dZxV896hUI62p48DI0UKzYd4BUxLZM4Z/view?usp=sharing

You can find jail addresses at the link below for the other KBP7 in prison who can receive letters and postcards written with blue or black ink on white paper. The letters are photocopied by the prison and only the photocopy is delivered to our friends. Use your full name (no abbreviations allowed) in the return address on the envelope.

Important! Our friends will not have your return address unless you write it on your letter, as the envelope will not be given to them.

Member of European Parliament, Clare Daly, speaks about 62-year-old protester to Trident, Clare Grady, along with Julian Assange, as Dublin’s representative in the E.P.
“Enough of the EU’s Russiaphobia. Stop abusing human rights to advance the interests of the arms industry. We should be engaged in dialogue, not war.” https://fb.watch/3E0-MqQibU/

– – – Clare’s Festival of Hope – – –
In case you missed it, you can watch on Youtube Clare Grady’s Feb. 7th, 2021, Virtual Festival of Hope, a celebration as she embarks on her federal prison sentence for disarming Trident’s nuclear weapons with Kings Bay Plowshares 7.

Below you can find the timestamps next to the names of listed speakers. The intro was clipped off accidentally, so read below until Mark Colville speaks.
Facilitator & Intro: Greetings. I’m Mary Anne Grady Flores, Clare Grady’s sister. This past Friday, Jun-San Yasuda, a Buddhist nun of the Nipponzan Myohojii order, and Irene Le, came to Ithaca, NY to pray and drum with Clare before she enters prison. Clare has joined Jun-San on her many walks for peace and justice over these past 40 years. We just played a snippet of that prayer time.

The Kings Bay Plowshares support team is hosting this event from the traditional homelands of the Cayuga Nation. The Cayuga people are members of the Haudenosaunee Confederacy, an alliance of six sovereign Nations with a historic presence on this land. The Confederacy precedes the establishment of New York State and the United States of America.

Thank you all for joining the Kings Bay Plowshares 7 – Festival of Hope for our sister Clare Grady as she leaves for Alderson federal prison in W. Virginia. She reports at 2 pm this Wednesday, Feb.10th, for her part in the April 4th, 2018, symbolic nonviolent disarming of Trident’s omnicidal nuclear weapons, in GA. Clare is the 6th of the 7 to be sentenced. Mark Colville is the last. We’ll hear from him shortly.

We thank ARIEL GOLD & CODEPINK (a national treasure) for sharing their webinar platform & spreading the word of today’s event. We invite viewers to share this video to your lists and social media lists.

This Festival of Hope was inspired by Clare’s sentencing statement (found on the website).
Clare calls us to listen to the people who have been on the receiving end of US nuclear policy from its beginning, and to hear from people working on dismantling what the Rev. Dr. Martin Luther King Jr. identifies as the evil triplets: racism, materialism, & militarism, also known as white supremacy, capitalism, & US total global domination, enforced by US nuclear weapons.
To read letters from jail from Clare, Carmen, Steve, Patrick, & Martha,
to read background
to see media coverage on the action,
to see videos,
& review history of 100 previous Plowshares actions since 1980, please visit our website: kingsbayplowshares7.org. Today’s event will be posted there.

We are honored to have activists from different parts of the world today.
0.30 sec. Mark Colville – is the only one of the Kings Bay Plowshares 7 co-defendants who hasn’t been sentenced yet, though Mark has already spent 15 months in county jails in Georgia before the trial. Mark lives at the Amistad Catholic Worker in New Haven, CT with his wife Luz Catarineau Colville and their youngest child, Isaiah. He introduces our next guest’s video interview.
5:29 Setsuko Thurlow – is one of the last living Hibakusha survivors of the Hiroshima bombing in Japan. She implores us to disarm nuclear weapons. She worked tirelessly with nations to sign the Treaty on the Prohibition of Nuclear Weapons that went into force on Jan. 22, 2021, making nuclear weapons illegal! She implores us to get the US and the remaining 8 nuclear nations to sign and disarm!
21:30 Leona Morgan –is a Diné activist from the Navajo Nation, working in New Mexico and Arizona to stop uranium production and dumping, and fighting nuclear colonialism.
30:00 Leah Grady Sayvetz – is Clare’s oldest daughter. She lives in Ithaca, NY, and when the weather is warmer, works as a farmer in the area. She’ll sing an a cappella song.
32:43 Russell Rickford – is a historian of the Black Radical Tradition and an organizer with Democratic Socialists of America. He shares the story of May Mallorie, a Black radical feminist & activist from Harlem.
42:17 Clare Daly – is an Irish Member of the European Parliament for the Dublin constituency. She has been a co-defendant in an Irish trial of civil resistance to US warplanes refueling at Shannon Airport. Clare’s co-defendant Mick Wallace also speaks.
49:30 Agnes Williams – is a Cattaraugus Creek Seneca mother and grandmother. She educates the public about uranium mining and waste disposal on Indian territories. Agnes met Clare walking with Jun Sun across NYS. Agnes is a community organizer/activist with the Indigenous Women’s Initiatives in Buffalo NY and the local affiliate of the Indigenous Women’s Network in Austin Texas. Currently, she works on three campaigns- Dismantling the Doctrine of Discovery, Water is Life, and Nuclear-Free Future.
1:01:20 John Flynn and Eoghan Ó Ceannabháin (pronounced Owen O’ Canavan) – are musicians from Dublin who’ve been part of the band called Skippers Alley.
1:09:00 Letters from Jail (letters from jail & addresses on https://kingsbayplowshares7.org/ website) Patrick O’Neill’s letter read by his wife Mary Rider, and Martha Hennessy’s letter read by Leah.
1:14:22 Jack Cohen-Joppa – of the newsletter NuclearResister.org and a key support person of Steve Kelly will read a letter from Fr. Steve Kelly. He’s still in Oklahoma in the slow process of being transported by federal marshalls to Tacoma, WA for a probation violation. Jack will also give a brief update on Carmen Trotta.
1:19:45 Liz McAlister- Kings Bay Plowshares 7 codefendant has served 18 months in county jails in Georgia, pretrial. She is now living in New London, CT with her daughters and their families.
1:24:03 Emma O’Grady – Clare’s cousin is an Irish writer and actor from Co. Galway. She reads a powerful & moving poem for Clare.
1:29:40 Clare Grady – is the 6th KBP7 codefendant to report to 1 year & 1-day prison sentence. Clare’s completed 3 1/2 months pretrial. With good time she may serve approximately 6 months in Alderson, W. Virginia, federal prison where she had been previously imprisoned for her part in the Griffiss Plowshares in 1984-85.
1:42:15 Oona Grady (Clare’s niece) and her partner James Gascoyne – are part of a band called Drank the Gold, living in Saratoga Springs, NY. Watch all the zoom boxes start moving to the music!
1:45:32 Bill Wylie-Kellerman – is a theologian, author, nonviolent community activist, and civil resister, most recently to water shut-offs in Detroit. Bill leads us in a collective prayer for the ancestors, for all who are imprisoned, for all who resist, and for Clare as she takes the next part of her journey.
1:56:00 Closing During the massive global movement to disarm nuclear weapons in the 1980s, Reagan & Gorbechev reduced the stockpile from 90,000 down to 14,000, according to Nobel Prize winner Dr. Helfand. People knew the threat because of living during the 1950s thru the 70s, through atomic bomb school drills hiding under desks (duck & cover);
watching the film “The Day After” which showed what a nuclear winter looks like;
living through the meltdown of Three Mile Island;
from the Indigenous-led fight to end nuclear dumping and testing on sacred lands,
from the national grassroots FREEZE& SANE campaigns;
from the early Plowshares disarmament direct actions and
from the millions marching in the streets demanding disarmament.
Today, the nuclear doomsday clock is still set at 100 seconds to midnight, despite the new Biden Administration. It’s our work now is to work city by city, town by town to disarm directly & divest (as was done during the anti-apartheid movement in S. Africa) from pension funds that invest in stocks of nuclear weapons companies.
The Treaty on the Prohibition of Nuclear Weapons is now in force outlawing nuclear weapons. People say this is not the 1980’s. No, it’s not. We are in the incubation period of the new anti-nuclear movement, as it was in 1979. We must rid the world of the last 14,000! The world’s many movements for justice are merging in the streets. Go to our website to see
25 ways to GET INVOLVED. As we used to say in the United Farm Workers, Si Se Puede!!! (Thanks to Dolores Huerta!). It can be done!!! Thanks to all of you who joined us to celebrate this inspirational activist! Now it’s our turn.

We bless you, Clare, as you enter the 3rd stage of the KBP7 action – the prison witness.