“I’m Going in there with Hope” – Patrick O’Neill

Driving through Ohio, about to begin a 14-month sentence for his part in the Kings Bay Plowshares 7 disarmament action Patrick O’Neill didn’t sound like someone about to enter federal prison within minutes. “I’m going in there with hope. There’s cause for optimism right now.”
At 2 pm today, January 14, Patrick O’Neill walked into the Federal Correction Institution (FCI) Elkton, in Lisbon, OH. He has already served 7-1/2 weeks pretrial. He should be released in 11 months with good-time credit. He might also get an early release to a halfway house. This father of eight, grandfather of 2, and devoted spouse of Mary Rider may be there until November.

Patrick called Steve Dear, his good friend of 40 years, to share his thoughts on what’s ahead.
“I’m ready to make some new friends, to tell you the truth. I want to start a book club reading Gilead by Marilynne Robinson. I’m going to join or start a prayer group right away.”

“Another hopeful sign is January 22 when the Treaty on the Prohibition on Nuclear Weapons goes into full force. We have the rule of law banning nuclear weapons. And Pope Francis has completely and totally established the church’s position that nuclear weapons are sinful. He’s basically saying what (Jesuit Father) Dick McSorley said: ‘It’s a sin to build a nuclear weapon.’ He’s not talking about deterrence and some timeline. He’s saying these things have got to go. I feel empowered by all that. We have some of the most important moral figures in the world speaking our language and now the law is on our side. I’m going to take a copy of the treaty in there with me and share it with the guys and maybe have a study session on it.” (To find out about local US actions to plug into on Jan. 22, visit the NuclearResister.org website)

“I run every day. I might be running in place for a few weeks. It might be weeks before I get outside and get some sunshine. I might be in solitary (for COVID quarantine – 2 or 3 weeks). I’m not really fearful. I’m going in there with hope.”

“One of the things that makes going to prison manageable and easier for me is the support of my family and friends. Thank you to everyone who is sharing in this journey with me.”

The Festival of Hope for Patrick which was held last Sunday, January 10, is viewable on the Kings Bay Plowshares Facebook page:https://www.facebook.com/Kingsbayplowshares/videos/792138228005966/ It will also be put on the KBP Youtube channel which can be accessed through the website.

Clare Grady is planning a Festival of Hope on Sunday, Feb. 7th, sometime in the afternoon, before she begins her sentence on Feb.10th. Her guests, including possible Irish Parliamentarians and First Nation Women working to stop nuclear weapons and dumping, are to be announced soon. Watch for the next update.
She’s been assigned FCI Alderson, West Virginia, to begin a 12 month and 1-day sentence. She’s already served 3-1/2 months pretrial and with good-time, she may be released after 6 or 7 months. She’ll be traveling from Ithaca, NY with her family to report. Clare served 1 1/2 years at Alderson in 1984-85 for her part in the Griffiss Plowshares Action in Rome, NY with co-defendant Liz McAlister.

Carmen Trotta and Martha Hennessy began their sentences on Dec. 14. They were quarantined for first three weeks but are now settling into the prison routine. You can send our friends letters on white paper with blue or black ink but no drawings or colors. Use your full name in the return address. We are checking what else they may receive. Please check our website for any updates. You can read their prison reports at: https://kingsbayplowshares7.org/category/jail-reflections/ 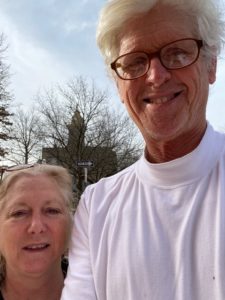 Fr. Steve Kelly is still in the process of being transported in federal custody from Georgia to Tacoma, WA to appear in court for a probation violation. He completed his 33-month sentence for the Kings Bay Plowshares action in county jails prior to sentencing. We do not have any current address for him at this time. He sent this message from jail on Dec. 9, “Let’s go back to the bedrock basics. We have the Isaiah 2:4 imperative of conversion. Let’s continue to be open for inspiration and help each other to be God’s instruments, in going from war to peace.” He also said that he feels things are moving along slowly but satisfactorily.
Mark Colville is the only defendant not sentenced yet. He has already served 15 months pretrial in Camden and Glynn county jails. Mark received word from Judge Lisa Godbey Wood on Dec. 8th that she has granted him another stay of sentencing until Friday, Feb. 19 at 10 am. Mark will not waive his right to be sentenced in person before Judge Wood. Due to the pandemic, if Mark leaves Connecticut he must quarantine for 14 days upon return. Mark can’t afford that time now as he’s been the medically designated driver for his nephew Alexander, taking him 3 times a week for dialysis from New Haven to Hartford.

Liz McAlister was sentenced in June to the 17 months she had served pretrial with Mark and Fr. Steve in the two Georgia county jails. She just celebrated her 81st birthday in November. She participated in the Griffiss Plowshares action at the AFB in Rome N.Y. on Thanksgiving Day, 1983 and was sentenced to 3 years in FCI Alderson, W. Virginia. Liz is doing well despite living under 3 years of supervised probation restrictions in New London, Connecticut with her family.

To access the defendants’ powerful sentencing statements go to https://kingsbayplowshares7.org/sentencing-statements/ which is under the “Legal” tab in the menu. Biographical information can be found under the “About” tab.

Anti Nuclear Actions To Take On January 22 – The Treaty on the Prohibition of Nuclear Weapons officially becomes international law, in force.

According to the Bulletin of Atomic Scientists, the doomsday clock is set at 100 seconds to midnight due to President Trump’s withdrawal from critical nuclear treaties leaving the world closer to the brink of nuclear destruction. President-elect Biden’s win does not provide a substantial change in this trajectory unless a massive people’s movement emerges as happened in 1982. This resulted in the reduction of the world’s nuclear stockpiles from approximately 90,000 down to 15,000. As Fr. Steve Kelly says, “Nuclear weapons will not go away by themselves!”
The witness of 100 plowshares actions culminating in the Kings Bay Plowshares 7 coincides with the work to abolish nuclear weapons with people around the world. ICAN (International Campaign to Abolish Nuclear Weapons), Back from the Brink and Don’t Bank on the Bomb are only three of a multitude of important local, national, and global organizations working towards nuclear disarmament. On January 22nd the Treaty on the Prohibition of Nuclear Weapons will enter into force making nuclear weapons illegal, 75 years after their first use. To find out about actions happening at local military bases or Pentagon contractors in your area and to call for the US to join this treaty and become one of the nations to disarm, see the NuclearResister.org website.

And check out 25 Things You Can Do: