Carmen was driven by a group of community members and friends from St. Joseph House Catholic Worker in NYC to the prison in Otisville, NY, about a two hour drive. Before leaving he received a blessing from many friends with a laying on hands. The group also stopped for a farewell meal in Middletown near the prison.

Carmen was given a 14 month sentence and has already served 7 weeks. He is expected to be quarantined for two weeks and then put into the prison camp population. The prison has stopped all visiting which may be a sign that the virus rate is growing. 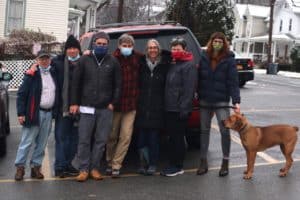 Carmen in middle before reporting

Martha was brought from her home in Vermont to Danbury, CT by her husband, Steven Melanson to begin her ten month sentence. Two of her codefendants, Mark Colville and Liz McAlister along with Liz’s daughter Frida Berrigan and Bill Marsten met them in the parking lot. Mark reports, “I was conscious of Martha’s courage and faith, her faithfulness to the Gospel and compassion for all of creation which has made it possible for our community of love and justice to extend beyond that prison.

Martha goes in with a message that we need now, more than ever, to abolish nuclear weapons and war. She’s laying down her life for that good news. We celebrated her there with homemade soup and chocolate. Frida’s children made beautiful signs saying ‘FEAR NOT’ and ‘We love you, Martha!’

I remember one particular moment when Liz stepped forward and reminded all that many great spirits had passed through those prison gates, including her beloved, Phil Berrigan. God rest his soul and many other resisters. Martha is carrying on that tradition and we were able to celebrate her as a community. It was a beautiful day, with snow descending as we drove up and intensifying as we drove back.

On the way, we passed through the little town of Sandy Hook. Dec. 14th, was the 8th anniversary of that terrible school shooting of all those children and educators. We are conscious of the connection between nuclear weapons and the kinds of violence that plague our communities and neighborhoods everywhere in this country. Martha’s going forward very much was a witness to this connection between the ultimate violence of omnicidal nuclear weapons and the violence that plagues our neighborhoods.” 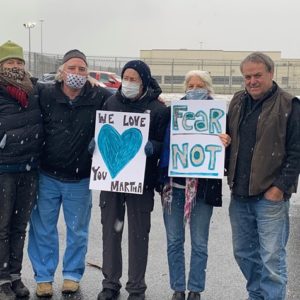 Fr. Steve Kelly is now being transported from jail in Georgia where he has been held since the action in April, 2018 to federal court in Tacoma, WA to appear for a probation violation. Steve had been convicted of trespass in an earlier action at the Kitsap-Bangor Trident nuclear submarine base and refused to comply with probation restrictions. Taking into account his good time credit, Steve has served beyond the 33 month sentence given by Judge Wood. It is expected that his extra time will be credited to any sentence from the Tacoma court. So far Steve has stayed COVID-free and healthy. He gave away all his belongings just after his October 15th sentencing expecting to be moved soon but it didn’t happen quickly. The transport to the West Coast could take days or weeks through various intermediate stages and holding prisons. He was in Florida on the first stop on this journey. Check the website for updates.

You can send letters to them on white paper with blue or black ink but no drawings. We are checking what else they may receive. See the website for updates.

Patrick O’Neill is scheduled to report to prison in Elkton, OH on Jan. 14. Clare has been ordered to Alderson, WV on Feb. 10. Mark Colville has a delay for sentencing until February 19.

To access the defendants’ powerful sentencing statements go to https://kingsbayplowshares7.org/sentencing-statements/ which is under the “Legal” tab in the menu. Biographical information can be found under the “About” tab.

The Kings Bay Plowshares 7 symbolically and nonviolently disarmed Trident submarine nuclear weapons on April 4, 2018, the 50th anniversary of the assassination of the Rev. Dr. Martin Luther King, Jr., who devoted his life to addressing what he called the “triple evils of militarism, racism, and materialism.” Carrying hammers and baby bottles of their own blood, the seven attempted to convert weapons of mass destruction. They hoped to call attention to the ways in which nuclear weapons kill every day, by their mere existence and maintenance.