Martha Hennessy, the sixth of the Kings Bay Plowshares defendants to be sentenced, was ordered to serve 10 months incarceration as well as three years supervised probation and restitution. This was a downward departure from the guidelines of 18 to 24 months recommended by the probation department. Conducting the sentencing virtually from the Brunswick, GA court Judge Lisa Wood granted defense arguments that her criminal history was overstated. She reduced Martha from a category 2 to a category 1, similar to what she had done for Carmen Trotta the day before. Then she further reduced the sentence for mitigating factors such as the good work that Martha does with the Catholic Worker, her age and the minor amount of damage she had personally caused on the submarine base. However, Judge Wood overruled all the other objections which Martha’s attorney, Stephanie Amiotte, vigorously argued including the failure to accept responsibility and the risk of death enhancement.

Four friends of Martha testified as to her good character and good works. Her long-time friend and co-worker Elizabeth Blum spoke about her deep respect and love for Martha. They met while both studied to be occupational therapists in 1982, have been employed together and even shared patients, are neighbors and friends in Vermont, have birthdays one day apart, attended each other’s weddings and share meals from home-grown produce. Elizabeth has watched and appreciated Martha’s growth in her Catholic faith and service to the most disadvantaged. Even though Elizabeth does not share Martha’s faith, she shares a deep concern “for peace and the planet and our families.” Elizabeth poignantly described growing up in the 1950’s during atmospheric nuclear testing, fearing milk contaminated with Strontium 90 fallout, the absurdity of imagining duck and cover drills in schools could save anyone. She expressed indebtedness to Martha for “exposing how vulnerable we all are to nuclear weapons” through the Kings Bay Plowshares action.

George Horton said he got to know Martha over his past two decades of involvement with the canonization process around her grandmother, Dorothy Day, and through Martha’s work at the Catholic Worker. His work at Catholic Charities in New York City over four decades involves teaching parishes about Catholic social teaching and the social action of the church. A Vietnam-era Army vet with a law degree, he described first seeing Martha at Maryhouse as she was bent over, meticulously cleaning a large pot that fed many people. “She’s a worker,” he said, “She’s always working… for people who needed help and were welcomed into the community of the Catholic Worker.” He said that Catholic Charities of New York has a budget of $80 million. “We can become separate from the people…. We are not able to advocate for justice and peace because we have a government contract.” In contrast, Martha’s life involves charity as well as advocacy for justice and peace like her grandmother. “Martha challenges you. But I want you to know that I have never been challenged by Martha where I have never felt the love that she has…. Martha is a critical part of the Catholic Worker community…. She cooks, cleans…” He described how Martha has important relationships with homeless people that keep them from feeling isolated and alone. She engages them in conversation. “That’s what the Catholic Worker community is about…. There’s something special going on here…. Martha’s heart breaks when she sees someone hurting. To take her out of the Catholic Worker right now would be terrible.” He told the story of standing with Martha and others in St. Patrick’s cathedral noticing a Blue Lives Matter flag hanging the day after a police officer’s funeral. Someone objected to the pastor. “I thought the complaint should have been made in private. I remember she said, ‘George, sometimes people have to be made uncomfortable.’… My faith has grown through this experience of attending the trial and going to the base. It’s had an enormous impact on my faith.”

Mary Yelenick is a retired attorney and friend of Martha’s. She serves as the NGO Representative at the United Nations for Pax Christi International, a global Catholic movement for peace and nonviolence. As an attorney, Mary addressed Judge Wood on how “the adherence to law provides predictability and stability to society.” She spoke of the global community challenging the legality of “diabolical weapons of mass destruction that glide ominously through the waters of Kings Bay,” as was done to end what was once deemed “legal,” such as slavery. On Jan. 22nd, the Treaty for the Prohibition of Nuclear Weapons will enter into force, making all nuclear weapons illegal under international law.

Mary spoke of the principles from which Martha’s life and actions flow. “Her biological and spiritual heritage” comes directly from her Christian faith, handed down by her grandmother, Dorothy Day. Following her faith, “In a deeply symbolic, sacramental action,” Martha poured her blood at the Kings Bay nuclear weapons base hoping “that blood would be a wake-up call…”

Here’s part of Mary’s moving statement to the court. “The final questions that dying children everywhere – not only here in Brunswick, but all across the planet – will be asking their parents – as they and their parents scream in agony, consumed by raging fire; or withering away from radiation; or inexorably reduced to skeletal remains from global starvation, with nuclear dust clouds blocking the sun’s rays – is ‘why didn’t somebody stop this, while we still had a chance to stop it? ‘ And the response – the final agonized whispers of parents dying horrific deaths in Brunswick, Georgia, and all across the globe – the last human sounds before the extinction of all life on this small, fragile, beloved planet – will be: “Some people DID try to stop this. But we prosecuted them. And we locked them away.”

Martha’s spiritual director Sister Marylin Gramas had accompanied Martha in her discernment
process, saying, “I helped Martha be free to sense God’s promptings.” She noted Martha’s
shyness and low key nature and that a Plowshares action was not easy. She praised Martha’s
helping to offer food, shelter and especially welcome to the poorest at Maryhouse, and
described Martha’s deep appreciation of her grandmother, Dorothy Day, giving her life’s
convictions which led her to the action. She asked the judge for leniency so Martha could
continue her good work.

The prosecutor, Greg Gilully, then said that despite the good that Martha does, she broke the law and committed a serious crime. While she might not deserve the maximum of 20 years, a term of imprisonment was justified and needed as a deterrence.

Martha began her sentencing statement with, “I stand here as a result of my conviction that calls me to point out that nuclear weapons are illegal.” Then she quoted the U.S. Constitution that all treaties are to be the supreme law of the land. “I am attempting to help transform the fundamental values of public life. I am willing to suffer for the common good and for our sin of not loving our brothers and sisters, a condition that leads to war. ” She added, “I have no criminal intent; I want to help prevent another nuclear holocaust. The spirit of the law contained in international treaties for disarmament is very clear, to prevent mass murder on an incomprehensible scale. The Bulletin of Atomic Scientist’s Doomsday clock is set at 100 seconds to midnight. I see my grandchildren’s faces in that clock. ” Martha’s full statement will be on the website. Martha was ordered to report to prison in 30 days.

Fr. Steve Kelly, in the Glynn Co. jail still awaiting transfer to Tacoma, WA, to appear in court for a probation violation, let supporters know he was able to call in to hear the sentencing of his codefendants. The final defendant to be sentenced, Mark Colville, has been granted a delay of sentencing as he does not want to waive his right to appear before the judge in open court. Mark explained in motions filed with the court that Connecticut’s rules pertaining to COVID-19 are that upon returning from travel out of state, one has to quarantine. Mark is the sole driver for his nephew undergoing dialysis 3 times a week. The doctors have stated that there must be one designated driver to reduce the possibility of COVID infection. The judge granted a sentencing delay until Dec. 18th. If it is done virtually or during continued COVID travel restrictions, the court will provide the same call-in numbers to the public. 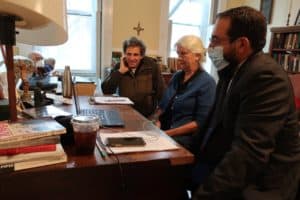 Martha preparing for virtual sentencing with Carmen Trotta and attorney Matt Daloisio. They were in the former bedroom of her grandmother, Dorothy Day, at Maryhouse in New York City.