The six remaining Kings Bay Plowshares defendants have had their sentencing dates moved from September to October 15 and 16. They had requested a continuance because they want to appear in open court in Georgia and the virus situation there is still too out of control to safely allow it.

Steve Kelly has now served almost 29 months in county jails since the action in April, 2018 so has already met the guidelines for his likely sentence. The court may not want to grant him further extensions. (You can send a postcard to Steve to let him know you’re thinking of him. Directions on writing here.)

The other defendants are not sure if they would prefer to seek more continuances or choose virtual appearances for sentencing in solidarity with Steve on those dates in October if it appears unsafe to travel to Georgia at that time. Check the website for updates.

September 9 will be the 40thanniversary of the first plowshares action in King of Prussia, PA. Eight activists, known as the Plowshares Eight, entered the GE plant where nosecones for nuclear missile warheads were manufactured. They hammered on several and poured blood on the nosecones and documents.

There will be a virtual Commemoration of the Plowshares 8 on September 9 at 7 pm ET sponsored by Stop Banking on the Bomb and other Pittsburgh based organizations. Molly Rush, Dean Hammer and John Schuchardt (three of the four living members of the group) will participate in a discussion and reflect on the action which sparked 100 similar acts of disarmament over the years. A summary of the history can be found here: https://kingsbayplowshares7.org/plowshares-history

Email Joyce Rothermel at <rothermeljoyce@gmail.com> to get the Zoom link for Sept 9. Emile de Antonio’s 1983 film, In the King of Prussia, is about the trial of the Plowshares Eight. The judge is played by Martin Sheen and the defendants are played by themselves. It’s available for viewing on Youtube: https://www.youtube.com/watch?v=kUph8GWFupE 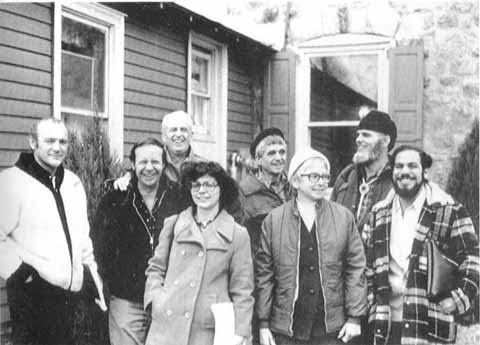 You can read Fr. Daniel Berrigan’s reflections on the Plowshares Eight action from the book Swords Into Plowshares: Nonviolent Direct Action for Disarmament (1987), edited by Art Laffin and Anne Montgomery: http://www.nukeresister.org/2015/09/08/swords-into-plowshares-fr-daniel-berrigans-reflections-on-the-plowshares-8-nuclear-disarmament-action/

Here’s an article written by Anna Brown and Mary Anne Muller ten years ago, for the 30th anniversary: https://wagingnonviolence.org/2010/09/the-plowshares-8-thirty-years-on/

And here is a 1990 New York Times article about the Plowshares Eight: https://www.nytimes.com/1990/04/11/us/eight-sentenced-in-1980-protest-at-nuclear-unit.html

“They shall beat their swords into plowshares; their spears into pruning hooks. One nation shall not lift sword against another. Nor shall they train for war anymore.” (Is. 2:4)