Liz McAlister, the eldest of the King Bay Plowshares 7, was sentenced today via video to time served, three years supervised release and for a portion of the restitution for the seven of just over $30,000. She was the first of the defendants to be sentenced. The remaining six are scheduled to appear in the Brunswick court, June 29 and 30. Thirty-seven years ago Liz first stood before a Syracuse federal judge to hear the court render a sentence for her Griffiss Plowshares direct action protesting nuclear weapons. Today, with her attorney Bill Quigley in New Orleans and her family beside her in Connecticut, Liz appeared via video before Judge Lisa Godbey Wood who sat in Georgia’s Southern District Federal Court in Brunswick, to hear today’s sentence, maybe the last in the long career of indefatigable hope and courage and unrelenting opposition to nuclear weapons. 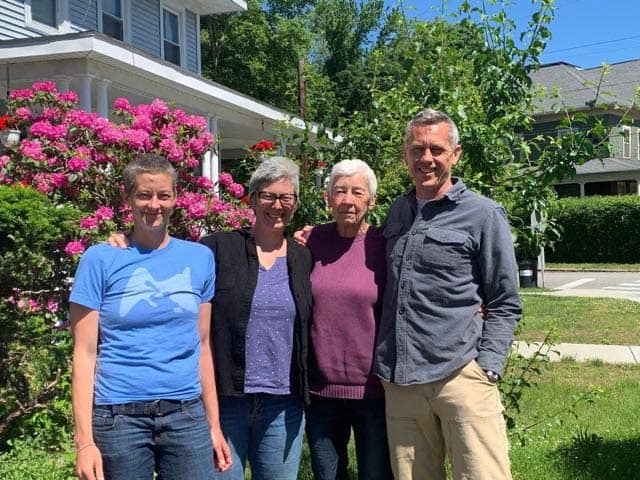 Last October, Liz, and the six others were found guilty of trespass, conspiracy and destruction of federal property, three felonies, and a misdemeanor in all, at the Kings Bay Naval Base in St. Mary’s, Georgia, where they had the audacity, in the middle of the night, to symbolically disarm a shrine celebrating US nuclear weapons and to protest the preparations for omnicide—the death of everything. Kings Bay is home to 6 Trident submarines that deploy one-quarter of the US nuclear arsenal.

The world has changed since October 2019 when activists gathered for the trial of the Kings Bay Plowshares 7 in Brunswick, Georgia. We heard testimony and watched a video describing their incursion into the naval base. We heard the defendants explain why they chose April 4—the anniversary of Rev. Dr. Martin Luther King, Jr.’s assassination—to carry out their act of faithful obedience. They described hanging banners, the first, a quote from the Rev. Dr. King that read, “The ultimate logic of racism is genocide,” and another that said “The ultimate logic of Trident is Omnicide.” They also painted messages of peace and prayerfully poured baby bottles of blood at the naval base.

In the intervening months, while federal marshals prepared presentencing reports for the Kings Bay 7, the COVID-19 pandemic rose up to take more than 400,000 lives globally—reminding us all, if we have ears to hear, of the peril of complacency in the face of low-probability/high-risk events. It is no exaggeration, and not meant to diminish the suffering of those who have been ravaged by or lost loved ones to the novel corona virus, to say that a nuclear war would make the current struggles look like a paper cut by comparison.

In quiet, quintessential southern, Brunswick, Georgia, the spotlight that shone briefly on nuclear weapons during the trial in October shifted abruptly in May when the pandemic of racism re-entered the public’s line of sight and the world learned that Ahmaud Arbery, a young African-American man was hunted down by three armed white men. Arbery, out for a morning jog in February, the men in pickup trucks, shot and killed him. Going into May, none of the men had been indicted or faced any charges. They had, literally, gotten away with murder. Now the three men sit in the Glynn County jail where Fr. Steve Kelly has been for more than two years.

Because of COVID, Instead of gathering in the Brunswick court with activists and supporters, complete with a festival of hope, we gathered in spirit to listen to the court proceedings on a conference call line. The night before, friends, family, and supporters had gathered for a virtual blessing and liturgy via a Zoom/ Facebook event that will be available on our website later this week.

Martin Gugino, the elderly man who was knocked down to the sidewalk by Buffalo police and lay bleeding from his head is a long-time peace activist. He recently made a series of video statements (which have been made private now) in support of the Kings Bay Plowshares 7 activists. He knows them from drone protests at the Hancock AFB in Syracuse, NY and Witness Against Torture actions in Washington, DC. Martin primarily works through the Western New York Peace Center. He texted today to let us know he is alive and in recovery.

Frida Berrigan, Liz’s daughter, gave a spirited statement of support for her mother attesting to her lifelong commitment to peace. “…as a 46 year-old white citizen in a nation that is going to spend $720 plus billion on the military this year, even in the face of an economy smashing pandemic that has killed 100,000 people and laid bare the stark inequity and fundamental brokenness of every fiber of the social safety net, I am grateful that people like my mother are willing to stand up and say: “Trident is a crime.”

As a 46 year-old white citizen in a country where white supremacy and militarized policing are so emboldened that Derek Chavin can crush George Floyd’s life out of him in front of a crowd, in front of cameras, where the McMichaels father and son can gun down Ahmaud Arbery in broad daylight as he jogged through the streets of a quiet Georgia town, I draw hope and inspiration from white people who continue to invoke Dr. King’s framework of the giant triplets of racism, militarism and materialism… these weights that cripple our collective humanity. I draw hope and inspiration from my mom and her friends who declare that “Black Lives Matter” who wed their anti-nuclear analysis with an anti-racist ethos, and declare that the ultimate logic of trident is omnicide.

So, I am here as a daughter who doesn’t want her 80 year-old mother sent back to jail and a human being who wonders how anything ever changes if people like my mom aren’t willing to take that risk.

I’m hoping you agree with the government that Liz McAlister has served enough time in jail already and you’ll help our family close this long and challenging episode of our lives today by sentencing her to time served. I also hope that you will recognize that as a person who owns nothing but the clothes on her back and the water colors she uses to paint with her grandchildren, you will waive all fines and restitution. ”

(Frida’s full statement is on the website: Sentencing Statement.)

Finally Liz spoke about what motivated her to join this action and take such risks. She quoted the biblical exhortation to “Beat swords into plowshares” from Isaiah and said, “All my life I’ve tried to follow the prophet, Isaiah, to stop learning war… All my life I have spoken and written against nuclear weapons and I believe these are contrary to life, destructive of life on every single level.”

The sentencing hearing began with technical glitches and was adjourned for more than a half hour at the beginning while these were worked out. There were 270 people listening to the audio feed when adjourned and due to some confusion about getting back on only 230 were on for the actual hearing which continued for another hour. Judge Wood said that she had read several hundred letters which had come to her from plowshares supporters and considered each of them. However, the judge then ruled against all the defense arguments for mitigation. Assuming this decision will apply to the other defendants when they are sentenced it will substantially increase their prison time and make them ineligible for home confinement even with Covid-19 throughout the system.

The defendants are considering doing another webinar before the end of June. Stay tuned.