This April 4th marked the second anniversary of the Kings Bay Plowshares 7 disarmament action. It’s also a time of grave danger for people around the planet with the emergence of the novel corona virus, especially among the poor, the imprisoned, the homeless, the sick, communities of Color, the elderly, and the marginalized. This is only the beginning of what lies ahead. Fault lines are widening as bread lines grow beyond lengths seen during the great depression. You, dear friends, may be sick, or have lost loved ones, or lost income. You may be disconnected from loved ones, or have family or friends working on the front lines to save lives. We see you and grieve with you. We acknowledge that this world has forever changed.

There is an irony. It took a tiny virus to stop us in our tracks, something we thought wasn’t possible. Many of us have been blinded to what death feels like, having learned a terrible lesson of indifference especially since the bombings of Hiroshima and Nagasaki. Every day many of us accept, without protest, the reality of living in a world that could be erased at any moment by nuclear weapons. And because we are willing to live with that absolute threat, we are also able to ignore the death and suffering that the mere existence of these weapons brings in denying the poor and displaced of the world their rights to health and safety and independence. The Kings Bay Plowshares action was a declaration that another way is necessary. And possible.

The KBP7 trial guilty verdict came on Oct. 24, 2019. There is still no sentencing date. The arrival of the virus has brought additional delays to the process. Sentencing may not happen until late May or June or even later. Judge Wood has informed the defendants that she will not be making any decisions until after April 17th at the earliest. That date was set before the extension of the federal stay at home recommendations until the end of April.

Originally expected in January, 60-90 days after the trial, the sentencing was first delayed by waiting for the required probation reports and sentencing recommendations. That was done by February and the attorneys’ schedules were cleared for the end of March or April. Then the global pandemic struck. Now everything is on hold. When sentencing finally takes place, the court may be closed to observers because of virus concerns. No one knows yet. It’s also possible that the judge may hold court sessions by video conference with no defendants physically present in the court. This is all unprecedented territory.

Fr. Steve Kelly has been in county jails for the past two years. We are concerned about his health and that of others in close confinement together facing the pandemic. We have not heard of any cases of the virus at the Glynn County Detention Center, so far. Fr. Steve was adamant that he does not want any special treatment or for a campaign to be released or for us to be distracted from the real issue of nuclear weapons. The other defendants are home under curfew restrictions (8:30pm-7am). The sentencing recommendations call for 15-21 months for Liz (already served 17mo.); 18-24 months for Martha; 21-27 months for Carmen, Clare, Patrick, and Mark; and 28-48 months for Fr. Steve.

Mark Colville, one of the KBP7, asks us to “all step back and consider the absurdity of sentencing people by video conference to federal prison. To tell us it’s too dangerous to be in a court and at the same time to order people to prison is inhumane. Its shows that the prison industrial complex takes a higher priority in the eyes of this government than human life. All prisoners should be set free.”

There are a number of petitions circulating calling for the release of prisoners in the face of the pandemic which is starting to hit many jails and prisons. Here’s one you might support.  Faithful America Petition

A special video has been prepared by supporters for the second anniversary of the action bringing greetings from around the world: 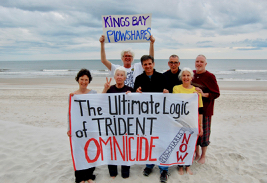 We urge you to contact Congress, demanding that money should be directed towards health care for all, particularly during the COVID-19 and for all future pandemics. This could be achieved by cutting funding for the military. The Nobel Prize winning International Campaign for the Abolition of Nuclear Weapons (ICAN) has pointed out that the U.S. spent $35.1 billion on nuclear weapons in 2019. This could have provided: 300,000 intensive-care beds, 35,000 ventilators, and the salaries for 150,000 nurses and 75,000 doctors. If only a small portion of conventional weapons spending were redirected many more supplies could be available to provide for the rest of the world rather than the endless wars our government pursues now. Our world would discover its real security lies in a shared humanity, not in nationalist arrogance or domination.

KPB7 defendant, Patrick O’Neill, writes, “At this juncture we stand in the depths of Lent, overwhelmed by a deadly virus, scores are dying … and yet the U.S. war machine grinds on — generals and admirals assuring us of their readiness to destroy all of Creation. Heresy! God forgive us! Jesus weeps! Let us, instead, heed the words of the United Nations Secretary General Antonio Guterres: ‘The fury of the virus illustrates the folly of war.’ May the God of Love have Mercy on Us.”

We understand that so much has changed and many are without income at this time. We ask for donations only if you are able and doing well. Thank you for all the support you have given through these past two years. Your support for the Kings Bay Plowshares 7 will help cover the ongoing costs surrounding the seven codefendants while in prison and their families and communities. Checks can be sent to Plowshares, PO Box 3087, Washington, DC 20010. Or donate online here at this new :Isaiah project.   Thank you.