NYC –   This weekend, in solidarity with Pope Francis’ historic journey to Japan where he spoke in Hiroshima and Nagasaki for the abolition of nuclear weapons, three NYC vigils took place.

Two vigils were held at St. Patrick’s Cathedral on Saturday afternoon and Sunday morning. The Japanese Consulate Vigil took place on Friday. On Saturday night (ET), the Pope gave a public address at the ground-zero site of the U.S. nuclear attack on Nagasaki.

The vigils were organized in NYC partly by Kings Bay Plowshares 7 (KBP7) defendants who await sentencing possibly in January and face up to 20 years for their faith-based nonviolent and symbolic disarming of Trident submarine’s nuclear weapons in GA. The KBP7 applaud Pope Francis’ declarations for the abolition of nuclear weapons.
Saturday’s vigil. https://vimeo.com/375247340 Password: plowshares 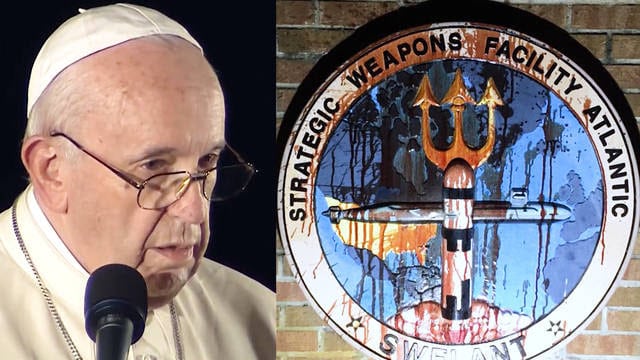 “With deep conviction, I wish once more to declare that the use of atomic energy for purposes of war is today, more than ever, a crime not only against the dignity of human beings but against any possible future for our common home. The use of atomic energy for purposes of war is immoral, just as the possessing of nuclear weapons is immoral, as I already said two years ago. We will be judged on this. Future generations will rise to condemn our failure if we spoke of peace but did not act to bring it about among the peoples of the earth. How can we speak of peace even as we build terrifying new weapons of war? How can we speak about peace even as we justify illegitimate actions by speeches filled with discrimination and hate?

The Pope’s full statement can be found at the Vatican website. https://popeinjapan2019.jp/en/ or vatican.va

Sam Husseini, who attended the Kings Bay Plowshares 7 trial, writes in his Nov. 22nd CounterPunch article, “In her testimony, Plowshares defendant Clare Grady … tried to explain to the jury the motivation and urgency of the group: US government is using nuclear weapons daily as a gun pointed at the head of the planet.”

In his Nov. 19th New Yorker opinion piece, The Pope and Catholic Radicals Come Together Against Nuclear Weapons Paul Elie said, “The moral obligation of all Catholics is to press for nuclear disarmament,” Bishop McElroy told me, “There are numerous pathways toward this goal: voting, public discourse, peaceful action, and dialogue. The Kings Bay Seven represent a pathway of civil disobedience toward this end, and a personal commitment, of enormous cost, that arises from a desire to witness to the Gospel.” Pope Francis’s anticipated call for the abolition of nuclear weapons will be a similarly dramatic act for the Church, one taken after several decades of reflection and deliberation, involving three Popes and their advisers. It will follow a path set by, among others, the Plowshares radicals.”