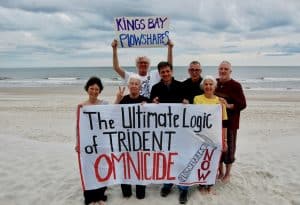 Today, Daniel Ellsberg, who exposed the Pentagon Papers, said in a statement to accuracy.org: “I strongly endorse the action of civil resistance by the Kings Bay Plowshares 7 defendants who are now on trial for having ‘nonviolently and symbolically disarmed the Trident nuclear submarine base at Kings Bay, Georgia.’ The sign they displayed during their action on the base — ‘The Ultimate Logic of Trident is Omnicide’ — is exactly right. I believe they are definitely entitled to the legal defense, among others, of ‘Justification’ or ‘Necessity:’ that an action which would under other circumstances be illegal can be justified as legal by a reasonable belief that it is necessary to avert a much greater evil: in this case, omnicide, the collateral murder of nearly every human on earth in a war in which the nuclear missiles aboard Trident submarines were launched.

“I lay out the argument for that defense in this case in an affidavit that has been submitted to the court. It is based on an earlier affidavit, much longer and more detailed, with legal references, that I have entered in similar trials of anti-nuclear resistance. A key point is that without the impact on myself of actions of civil resistance during the Vietnam War like those of the defendants in this case — including those of Father Philip Berrigan, the late husband of the current defendant Elizabeth McAlister, and of Dorothy Day, grandmother of another defendant Martha Hennessy — I would never have considered revealing the top secret Pentagon Papers: which legal scholars have described as having had, ‘arguably at least,’ a causal effect in shortening the Vietnam War.

“I believe that omnicide, the end of civilization and most of humanity, will not be averted without a moral transformation and political mobilization that requires actions of civil disobedience — including that of the Kings Bay Plowshares 7– to inspire.”

Ellsberg’s latest book is The Doomsday Machine: Confessions of a Nuclear War Planner.

Six of the The Kings Bay Plowshares 7 — activists who entered into a Trident nuclear submarine military base on April 4, 2018 — are available for interviews. Father Stephen Kelly, a Jesuit priest, continues to be in jail. See the website for more information: KingsBayPlowshares7.org.
Their trial is set for Oct. 21 in Brunswick, Georgia. The judge is Lisa Godbey Wood. They still do not know if they will be able to argue various justifications for their actions, like a Defense of Necessity as outlined by Ellsberg. However, they can address all of this in interviews:

ELIZABETH McALISTER, @kingsbayplow7
McAlister, 79, was recently released — after over a year and a half in jail. Eventually the government allowed her not to wear an ankle monitor, but she still has to regularly report. She is the widow of Philip Berrigan.

MARTHA HENNESSY, marthahennessy at gmail.com
Hennessy is also one of the Kings Bay Plowshares 7. She is also the granddaughter of Dorothy Day, the founder of the Catholic Worker movement. Hennessy was featured on the Intercepted podcast earlier this year. Also see a recent interview with her that gives an overview of the legal and moral justifications for their action, including ongoing U.S.nuclear weapons policy.

MARK COLVILLE, amistadcwh at yahoo.com, (also via his wife, Luz Catarineau, luzcolville at gmail.com)
See background on Colville, who has raised several children with his wife at the Amistad Catholic Worker in Connecticut. He spent most of the last two years in jail. See his statement justifying their actions, including on the basis of religious freedom at a hearing in August. He also notes a whole series of onerous conditions the court has placed on the Plowshares activists, for example: “for over nine months now this court has denied me the opportunity to meet with my co-defendants and their lawyers to prepare for court appearances or to discuss written submissions to the court.”

CLARE GRADY, claretgrady at gmail.com
Grady, of the Ithaca Catholic Worker, coordinated the local soup kitchen dinners for 17 years and is an anti-war activist. She is featured in a video on the Plowshares website noting that the U.S. government effectively uses nuclear weapons regularly — as when a one uses a gun to rob a store. See video.

PATRICK O’NEILL, pmtoneill at aol.com
O’Neill is the father of six daughters and two sons. With his wife, Mary Rider, he co-founded the Fr. Charlie Mulholland Catholic Worker House in Garner, N.C. See his statement to the court which also highlights his defense on religious freedom grounds. He also wrote a piece for The Baltimore Sun about McAlister.

CARMEN TROTTA, trottacarmen at yahoo.com
Trotta has been a member of the New York Catholic Worker for over thirty years and cares for his elderly father. He was also featured on the Intercepted podcast earlier this year with Jeremy Scahill.

More information is available at KingsBayPlowshares7.org and via:
Mary Anne Grady Flores, gradyflores08 at gmail.com
Bill Ofenloch, billcpf at aol.com