BRUNSWICK, GA—Both the government and the defense finished their testimony yesterday at 5 p.m. in the Kings Bay Plowshares 7 anti-nuclear weapons case.

Defendants were able to say much more than had been expected after the wide “in limine” restrictions established late last week before trial. They spoke about their strong faith motivations and their knowledge of the horrendous effects of nuclear weapons, and read portions of documents they had carried onto the Kings Bay submarine base in their action on April 4, 2018, the fiftieth anniversary of the Reverend Dr. Martin Luther King, Jr’s assassination. Thursday will likely see the trial end with closing statements, the charge to the jury, and jury deliberations.

In a recurring pattern, the judge would allow items the seven carried onto the sub base into evidence over frequent government objection. Martha Hennessy was even allowed to read from the indictment that nuclear weapons are always illegal. The judge did always remind the jury the items admitted were only for the fact that they were left on the base, not that they were true.

The prosecution called their final witness in the morning, base Facilities Management Specialist Juan Melgarejo, to verify the expenses of cleaning and repairs after the disarmament action, which he reported totaled $31,833.

Then two defendants, Hennessy and Patrick O’Neill, who had not previously given opening statements did so, and the defense began their case with Attorney Stephanie Amiotte examining Hennessy. After overruling an objection from the prosecution, the indictment of nuclearism the seven carried and which Hennessy had posted at the Strategic Weapons Facility Engineering office (known as SWFLANT) finally was allowed into evidence by Judge Lisa Godbey Wood.

Go Pro video footage was also admitted of Hennessy reading Bible verses from the prayer book “Give Us This Day” which she, Clare Grady, O’Neill and Mark Colville had read as they waited to be apprehended by base security personnel. Hennessy ended her testimony with, “It’s imminent (nuclear war) and it haunts me.”

Next, Attorney Fred Kopp, in examining Carmen Trotta, asked why he and his colleagues went to Kings Bay. Trotta said that the base has one quarter of the US deployed nuclear weapons, and that it cannot be legal to destroy nearly all life on Earth. He noted the “outrage of God at putting his creation in jeopardy.” Trotta was one of three who went to the so-called “Limited Area,” where deadly force is authorized and where the activists believe nuclear weapons are stored in bunkers. Kopp elicited from Trotta the extreme caution the three took to be “careful for everyone’s sake” as they entered the zone and when they were approached by Marine guards.

Grady, in examination by Attorney Joe Cosgrove, said that the consequences of global nuclear war are so atrocious they necessitate the creation of the word “omnicide.”

“Trident is the crime,” she said, explaining her use of crime scene tape, not caution tape, as the government kept calling it, at the SWFLANT office. Grady also noted that her colleagues used hammers to “deconstruct” or “transform” weapons to plowshares, instead of doing damage as the government claims. In cross examination, chief prosecutor Karl Knoche rapid-fired a series of accusations at Grady, claiming that she and her co-defendants believed themselves to be a law unto themselves. Grady calmly answered that the egregious use of weapons is bullying, not the painted peace messages and blood that Grady and Hennessy poured on the engineering office sidewalk.

Attorney Matt Daloisio examined Colville, who quoted his father saying, “Integrity is what you do when no one is looking, taking responsibility to what you know to be true.” Colville also explained his use of the word “idolatry” that he had written on one of the missile replicas, noting that the Bible urges us to remove, even smash, idols. Colville related that it was a long time before any authorities actually confronted him and Grady, Hennessy, and O’Neill in what the activists call the missile shrine area, even though several vehicles approached, slowed and then drove on. So after about an hour they felt they had done enough. They sat down and prayed, then carefully showed their hands when the vehicles finally approached them. In response to the repeated cross examination accusation of arrogantly choosing to run red lights, Colville said that he ran every red light when his wife Luz was in labor. “It was an emergency!”

Representing himself, O’Neill was examined by advisory attorney Keith Higgins. As a “cradle Catholic” grandchild of four immigrants from Ireland, his faith was always his guide and led him to co-found the Fr. Charlie Mulholland Catholic Worker in Garner, NC with his wife, Mary Rider. He noted that Catholic workers take nonviolent action and break the law like Rosa Parks, Susan B. Anthony, and Dr. King, to bring social change. In reviewing the items he took onto the base, O’Neill brought international law into the courtroom. He mentioned copies of the nuclear Non-Proliferation Treaty and the new Treaty for the Prohibition of Nuclear Weapons. In government’s exhibit 36-1B-6 GoPro video footage O’Neill recorded himself quoting Pope Francis saying the use and possession of nuclear weapons is to be firmly condemned

The seven’s statement is one of love and hope, O’Neill said. 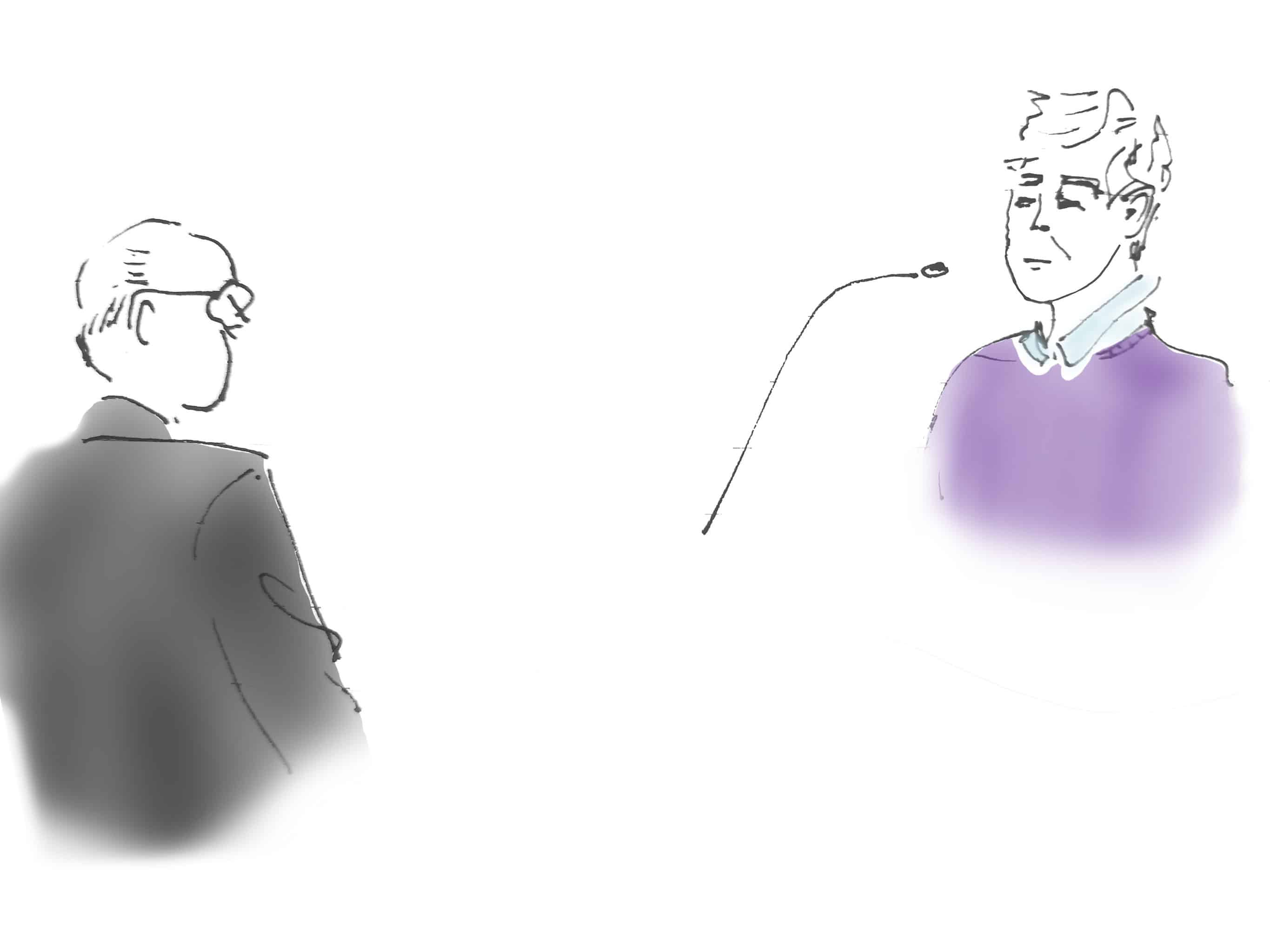 Elizabeth McAlister was questioned by her attorney Bill Quigley. After briefly describing her life growing up and her life as a nun, McAlister explained how she got involved in the peace movement. As a college professor during the Vietnam War, she said, 30 of her students’ boyfriends came home in body bags.

“One could not be a teacher of these young women without sharing their grief. I felt that we were being called to more.”

She related the story of marrying well-known activist Philip Berrigan, who later co-founded the Plowshares movement. They established the activist community Jonah House in Baltimore. McAlister described how her continued sense of her vocation led her to this action. Prayer, she said, was integral to the action. There is a “reshaping” of conscience that happens within each of us, which mirrors the transformation we seek of weapons into tools for cultivating life. McAlister also explained her reason for using the symbol of blood.

“War involves radical bloodshed. (Using blood as a symbol) is a way of remembering that war is bloodshed, and we long to see the end of war and the end of shedding the blood of another human being.”

Scott Bassett, the communications officer for the Kings Bay base was called as a witness by the defense. Upon prompting, he testified that he had at earlier pre-trial motions hearings given a statement to the Washington Post. His statement said that there was no threat to any assets or personnel at the base from the protestors. He said the statement meant there had been no damage to military assets such as submarines or weapons systems, not a missile display.

Apart from a few objections and brief comments to indicate his agreement with the testimony of his co-defendants, Fr. Steve Kelly, S.J., remained silent throughout the proceedings.

After exiting the courthouse, the defendants told a gathering of supporters and media they were pleased that they were able to say so much more in court about their beliefs and motivation than they had expected because of the judge’s rulings prohibiting mention of their religious motivations, international law, or necessity.

“We are seeing what the courts protect,” said Grady.

Supporting this profound sacrifice by these seven requires generosity. Your support of the Kings Bay Plowshares 7 will help cover the ongoing costs surrounding this trial and social change effort. You can give at our GoFundMe site and checks can be sent to Plowshares, PO Box 3087, Washington, DC 20010. Further details check the website: kingsbayplowshares7.org.